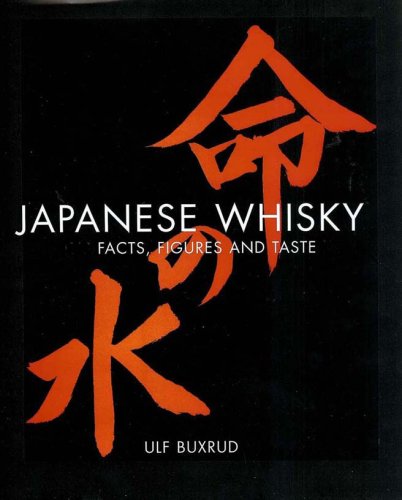 This book, first in its category, is an endeavor to document the facts and figures of a formative and exciting segment of the Japanese whisky industry.

It is also an attempt to mirror the arduous work and joy surrounding the rise of a trade that became an industry on its own merits.

The 'Japanese Whisky' portrays all distilleries involved in the foundation of a unique chapter in the global history of whisky making. Some of these entities are gone; others are still operating at full steam. Each of the distillery portraits contains histories and comprehensive technical data, some never published before.

A special segment maps a vast number of whisky versions produced over the years. Tasting notes, photo documentation and comments are included for each of them.

Plenty of side information such as how to travel and visit distilleries, the Japanese whisky bar culture, how to and where to find Japanese whiskies and much more is highlighted in the book

Ulf's first contact with alcohol in general was at the European Club in the city of Abadan in Persia (now Iran), at the age of 15. It was the then famous blend whisky 'Black & White', which now is a bit hard to find. His infatuation was instant and intensive, and life lasting. And he had begun an un-systematic journey through the realm of whiskies over time, and around the globe. During a string of years his libation was the usual, traditional whisky blends, with an ice cube or a dash of soda water. Suddenly, around 1970, he found his salvation and his road. The Savoir was the Macallan. And the road was not for Mandalay, but for Speyside and their single malt whiskies. Later in life he de facto made a pilgrimage to Mandalay to fetch a bottle of a locally produced malt whisky. Other whisky path he followed brought him to Japan and its rich whisky culture.

In the early 80's when swamped with Single Malts he not only bought in a hotchpotch fashion but also in quantities larger than possible to consume. Several bottles were just slowly evaporating and dust collecting. No orderly investigation was applied like the subjects for his prime passion then, sampling wines and taking tasting notes. At one of these wine tasting exercises he was struck by the idea of utilizing the technique and the descriptive wine lingo to systematically explore his accumulated heap of Single Malts.

At the end of the 80's his Swedish wine-freak friends asked him to escort them through what they described as the 'jungle' of whiskies. It forced him to work out a lecture and a tasting scheme. During the period of 1989-1999 more than 3.000 individuals absorbed Single Malts and, hopefully, knowledge under his tutorship. This activity was recognized and by that he received an invitation to join the illustrious 'Keeper of the Quaich', in 1995. John Grant of Glenfarclas was his mentor.

The local, Swedish, interest in whisky underpinned by himself and other 'evangelists' led to an inflation in organized societies, circles and groups centred around not only the fluid, its history, geography, sociology and methods of production but also to organize group travels to visit the birth places of whiskies. And, not to forget, advise in cask investment matters. Today, Sweden harbours the highest density of such special interest groups in relation to its population. For instance, on the web only, there are 80+ whisky clubs to be found. All listing and reporting their scheduled activities regularly. Ulf happen to be a member of honour at some, and member of the board at others.

Ulf's previous book Rare Malts was awarded the title `Best book about Spirits in the world 2006' at the `Book Oscar' ceremony held in Beijing April 2007. He also contributed to the Asian segment of DK's Eyewitness Companion `Whisky'. Besides organising themed, structured whisky tastings, Ulf's special interest lies in collecting volumes dealing with the subject `whisky', and his extensive library includes 200+ titles spanning from mid 1700 to today.

Book Description DataAnalys, 2008. Condition: Good. A+ Customer service! Satisfaction Guaranteed! Book is in Used-Good condition. Pages and cover are clean and intact. Used items may not include supplementary materials such as CDs or access codes. May show signs of minor shelf wear and contain limited notes and highlighting. Seller Inventory # 9163320932-2-4

Book Description Dataanalys 2008-09-01, 2008. Hardcover. Condition: Very Good. Item is in very good condition. If supplemental codes/CDs for textbooks are required please contact us prior to purchasing as they may be missing. Seller Inventory # DS-9163320932-2