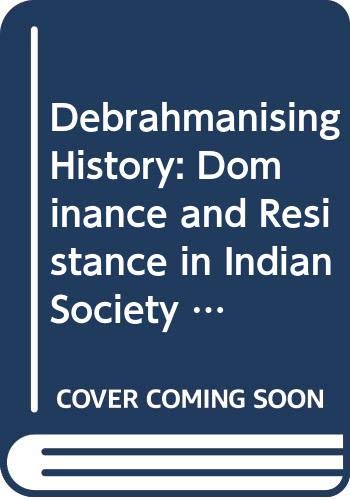 Shipping: US$ 8.07
From United Kingdom to U.S.A.
Destination, rates & speeds

Book Description Hardcover. Condition: New. Egalitarianism is neither alien nor the gift of the West. Marginalised people everywhere have always aspired to build an inclusive world. Espousing the perspective of the commoners, this revised edition of Debrahmanising History brings out the beauty and resilience of a counter-tradition by visiting some of the major sites of resistance and creativity from below. Ranged against caste and Brahmanism, this liberating tradition to be found in the egalitarians of diverse inclinations, particularly in the strands of Shramanism, Buddhism, the movements of subaltern sant-poets, Sufism, and Sikhism. This counter-tradition was carried forward in modern India by, more than anybody else, jotiba Phule, Iyothee Thass, Narayana Guru, Periyar, and Ambedkar. Recognising the power of culture in the politics of transformation, they had emancipator visions that embraced the whole of Indian experience, and stand firmly as an alternative to Tilak-Savarkarite, Gandhian, and Nehruvian visions. Their determined but diverse and resourceless struggles, fought in the teeth of opposition from the caste elites, could not arrest the neo-brahmanism which under colonial complicity and the archaeology of knowledge derived from Orientalism went on to reincarnate-and nationalize itself into octopus like Hinduism and Indian culture. Their sublime failure adds to their enduring appeal to the Dalit-Bahujans as old forms of hierarchy and hegemony menacingly morph into new structures of inequality in the world s largest democracy. In some studies, the emancipator thrust of this tradition is occasionally recognised but it is seldom integrated with civilisational studies on Indian culture and society. An attempt in that direction, this searing critique of caste and dominant historiography is meant for all those who are-or want to be part of the ongoing struggle of human liberation. Seller Inventory # 145244