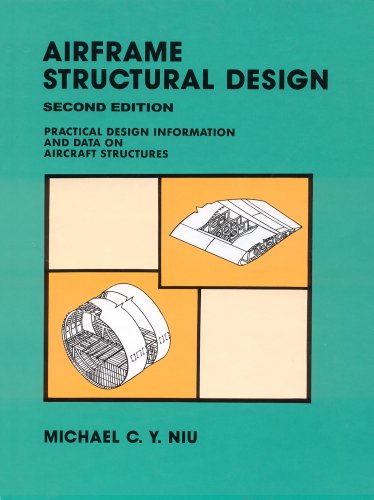 This book represents several decades of data collection, research, conversations with different airframe specialists, plus the author's more than twenty years' experience in airframe structural design. From structural standpoint, the book is intended to be used as a tool to help achieve structural integrity according to government regulations, specifications, criteria, etc., for designing commercial or military transports, military fighters, as well as general aviation aircraft. It can be considered as a troubleshooting guide for airline structural maintenance and repair engineers or as a supplementary handbook in teaching aircraft structural design in college. This book is divided into a total of sixteen chapter and emphasizes itemized write-ups, tables, graphs and illustrations to lead directly to points of interest. The data can be used for designing and sizing airframe structures and, wherever needed, example calculations are presented for clarification.

Prof. Michael C. Y. Niu is the president of AD Airframe Consulting Company and is a metallic and composite airframe consultant. He has acquired over 35 years experience in aerospace and airframe structural analysis and design. He was a Senior Research and Development Engineer (management position) at Lockheed Aeronautical Systems Company and he has been the Department Manager in charge of various structural programs, including development of innovative structural design concepts for both metallic and composite materials that are applicable to current and/or future advanced tactical fighters and advanced transports.
At Lockheed, he was involved in airplane conceptual and preliminary design and was stress lead engineer responsible for the L-1011 wide body aircraft wing and empennage structures. During 1966 and 1968, he served as stress engineer to B727, B747, etc. at The Boeing Company in Seattle. Prof. Niu is the author of the texts, AIRFRAME STRUCTURAL DESIGN (Second Edition, 1999), COMPOSITE AIRFRAME STRUCTURES (1992), and AIRFRAME STRESS ANALYSIS AND SIZING (Second Edition, 1999). He has also written Lockheed's Composites Design Guide and Composites Drafting Handbook. He received the Lockheed Award of Achievement and Award of Product Excellence in 1973 and 1986 respectively. He is listed in Who's Who in Aviation, 1973. Prof. Niu is a consulting professor at Beijing University of Aeronautics and Astronautics and chair professor at Nanjing University of Aeronautics and Astronautics of the People's Republic of China. He has been an honorary adviser in structures and airplane design to the Aero Industry development Center (AIDC), Taiwan (China) since 1973. Prof. Niu received a B. S. in Hydraulic Engineering from Chungyuan University, Taiwan, in 1962 and M. S. in Civil Engineering from the University of Wyoming in 1966.