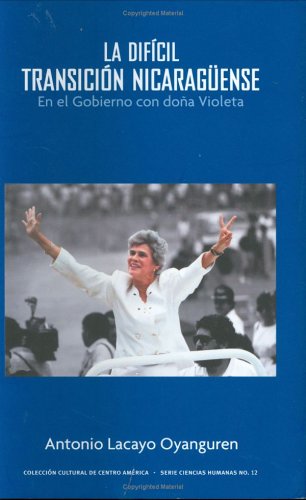 The author of this book, Antonio Lacayo, was the closest collaborator that Doña Violeta had during her presidency. This book describes a trustworthy testimony of the first 5-year period of the 90’s in Nicaragua during the Government of Doña Violeta de Chamorro (1990-1996), including the Electoral Campaign, her triumph and the two months previous to being sworn in. It reflects the Presidency’s Ministry agenda, a narrative of every day’s history, the challenges faced, the rendering of accounts about the successes and mistakes, the permanent negotiations with the Sandinista opposition, with allies in the UNO, with the Resistance, the Army and the Police, with world governments, the United States, the international financial organisms, those that rearmed, the manufacturers and entrepreneurs, the workers, the church, the National Assembly and the citizens. The book describes how difficult it was to achieve Nicaragua’s steady advance in a triple simultaneous transition during those six hard years, the only one in the modern world, because not only did the typical political transition from a totalitarian dictatorship to democracy take place, but also the transition of a centralized and decadent economy to one of a free market, with price stability and an unimpeded process of growth, and furthermore, the transition from war to peace, from confrontation to reconciliation. The difficult transition narrative describes in detail the countless moments in which the precarious Nicaraguan transition was in danger to collapse, but it was Doña Violeta’s image, the one that somehow would always unify, and make it possible for an orderly succession without traumas to take place, contributing in the process to the consolidation of the electoral democracy in Nicaragua.

The author, Antonio Lacayo studied at Georgia Tech and has a MBA from MIT. He was the closest collaborator to the President of Nicaragua during the years 1990/1997. He was appointed Chief of Staff (Presidency Ministry).