Items related to The massacre of Debre Libanos : Ethiopia 1937 : the...

Ian Campbell The massacre of Debre Libanos : Ethiopia 1937 : the story of one of fascism's most shocking atrocities

The massacre of Debre Libanos : Ethiopia 1937 : the story of one of fascism's most shocking atrocities 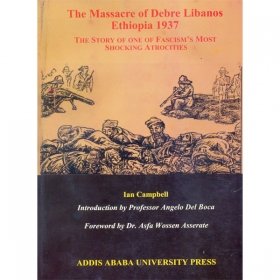 xlviii, 307 pages : illustrations, maps ; 21 cm. 'One of worst crimes committed by Italian fascism during the Italian occupation of Ethiopia was the massacre of the monks of Debre Libanos, on 20 May 1937. Graziani, the fascist Viceroy, then telegraphed from Addis Ababa to Rome, in a secret telegram, that 297 monks had been shot, yet in truth many, many more died. The author, Ian Campbell, is a Development Consultant specialising in East Africa, has been studying Ethiopia's cultural history since he arrived in Addis Ababa in 1988. In this publication he looks at the history of the monastery of Debre Libanos, and in particular the backround and history of the massacre and pillaging of the monastery by fascist Italian forces, which killed over a thousand monks. It also includes information on the rounding up of citizens thought to have some association with the monastery and who sere sent to Danane concentration camp, many not surviving.'

1. The massacre of Debre Libanos : Ethiopia 1937 : the story of one of fascism's most shocking atrocities

Book Description Addis Abab, Ethiopia : Addis Ababa University Press, 2014. Soft cover. Condition: New. "The Second World War by no means began in September 1939 as many Europeans suppose. People in Ethipia actually felt the Fascist mad rage to conquer and desstroy quite some time earlier -- a modern-day Italian army had already attacked the only independent nation in Africa (with the exception of Liberia) with unprecedented brutality in October 1935 . the great massacre of the 19th February 1937 after the assassination attempt on Viceroy Graziani, and the subsequent atrocities committed at the monastery of Debre Libanos, must be seen as the highlight of Fascist barbarity during the Second Impero."--Foreword. Description: xlviii, 307 pages : illustrations, maps ; 21 cm Contents: Prelude. Monastery of Debre Libanos -- Occupation and resistance -- Best-laid plans -- Massacre of Debre Libanos -- Persecution of the house of Tekle Haymanot -- Beginning of the end -- Appendices. Seller Inventory # Lid26