Items related to Wheel of Time Box Set 3 : A Crown of Swords / the Path... 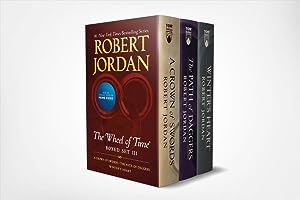 Wheel of Time Box Set 3 : A Crown of Swords / the Path of Daggers / Winter's Heart

Quantity: 5
View all  copies of this book
Buy New
Price: US$ 21.37 Convert Currency
Shipping: US$ 2.64 Within U.S.A. Destination, rates & speeds
Add to basket

Since its debut in 1990, The Wheel of Time by Robert Jordan has captivated millions of readers around the globe with its scope, originality, and compelling characters.

The Wheel of Time turns and Ages come and pass. What was, what will be, and what is, may yet fall under the Shadow. Let the dragon ride again on the winds of time.

About the Author:
ROBERT JORDAN (1948–2007), was a native of Charleston, South Carolina. He was a graduate of The Citadel, The Military College of South Carolina, with a degree in physics. He served two tours in Vietnam with the U.S. Army and received multiple decorations for his service. He began writing in 1977 and is best known for the internationally bestselling The Wheel of Time series, which is being adapted for television.