Items related to The Fires of Heaven: Book Five of 'the Wheel of... 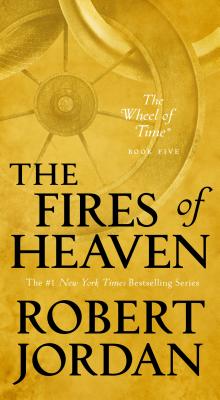 The Fires of Heaven: Book Five of 'the Wheel of Time' (Paperback or Softback)

Title: The Fires of Heaven: Book Five of 'the Wheel...

Into the forbidden city of Rhuidean, where Rand al'Thor, now the Dragon Reborn, must conceal his present endeavor from all about him, even Egwene and Moiraine.

Into the Amyrlin's study in the White Tower, where the Amyrlin, Elaida do Avriny a'Roihan, is weaving new plans.

Into the luxurious hidden chamber where the Forsaken Rahvin is meeting with three of his fellows to ensure their ultimate victory over the Dragon.

Into the Queen's court in Caemlyn, where Morgase is curiously in thrall to the handsome Lord Gaebril.

For once the dragon walks the land, the fires of heaven fall where they will, until all men's lives are ablaze.

And in Shayol Ghul, the Dark One stirs...

Save up to 90% on your favorite items at BargainBookStores.com! Our 20,000 square foot warehouse in Grand Rapids, Michigan is filled with hundreds of thousands of books and consumer goods, all at the lowest prices! We've been serving internet customers with great deals since 2001. All books ship from Grand Rapids, Michigan. 100% Customer Satisfaction Guaranteed We want to ensure your satisfaction. If you are dissatisfied with your purchase or shopping experience, we would like to hear from you. Please contact us by email: cs@bargainbookstores.com. Please be sure to include your contact information and order number. We do not charge a restocking fee for returns. Your Privacy BargainBookStores.com does not provide, sell or market customer information to other businesses or organizations.