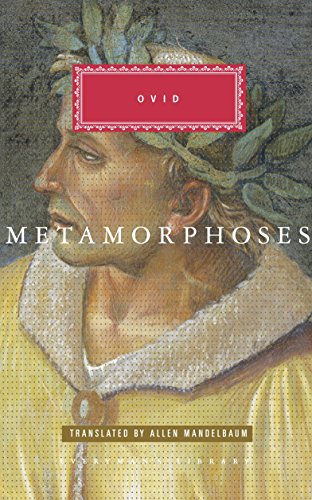 Synopsis: Ovid’s famous mock epic—a treasury of myth and magic that is one of the greatest literary works of classical antiquity—is rendered into fluidly poetic English by world-renowned translator Allen Mandelbaum.

Roman poet Ovid’s dazzling cycle of tales begins with the creation of the world and ends with the deification of Caesar Augustus. In between is a glorious panoply of the most famous myths and legends of the ancient Greek and Roman world—from Echo’s passion for Narcissus to Pygmalion’s living statue, from Perseus’s defeat of Medusa to the fall of Troy. Retold with Ovid’s irreverent flair, these tales are united by the theme of metamorphosis, as men and women are rendered alien to themselves, turned variously to flowers, trees, animals, and stones. The closest thing to a central character is love itself—a confounding, transforming, irrational force that makes fools of gods and mortals alike.

The poem’s playful verses, both sensually earthy and wittily sophisticated, have reverberated through the centuries, inspiring countless artists and writers from Shakespeare to the present. Frequently translated, imitated, and adapted, The Metamorphoses has lost none of its power to provoke and entertain.

About the Author: The Roman poet PUBLIUS OVIDIUS NASO, known to the English-speaking world as Ovid, was born in 43 BC and died in 17 AD. His major works, Ars amatoria and Metamophorses, were famed both for their technical mastery and their innovative interpretations of classical myth. His verses were immensely influential on European art and literature, and remain important source texts of Greek and Roman mythology.

ABOUT THE TRANSLATOR: Allen Mandelbaum was born in 1926 and died in 2011. His translations of Homer, Dante, Virgil, Quasimodo, and Ungaretti were all published to great acclaim. His rendering of The Aeneid won the National Book Award. He was the William R. Kenan, Jr. Professor of Humanities at Wake Forest University, North Carolina.

ABOUT THE INTRODUCER:  J. C. McKeown has served as a Research Fellow and Senior Tutor at the University of Cambridge and is now Professor of Classics at the University of Wisconsin, Madison. His publications include a commentary on Ovid's Amores and A Cabinet of Roman Curiosities. He is currently working on The Oxford Anthology of Literature in the Roman World, which will be published in summer 2013.

Book Description Condition: Good. May have some shelf-wear due to normal use. Your purchase funds free job training and education in the greater Seattle area. Thank you for supporting Goodwills nonprofit mission!. Seller Inventory # 0KVOGF008KFB_ns

Book Description Condition: Good. Buy with confidence! Book is in good condition with minor wear to the pages, binding, and minor marks within. Seller Inventory # bk0375712313xvz189zvxgdd

Book Description Condition: Good. Book is in Used-Good condition. Pages and cover are clean and intact. Used items may not include supplementary materials such as CDs or access codes. May show signs of minor shelf wear and contain limited notes and highlighting. Seller Inventory # 0375712313-2-4