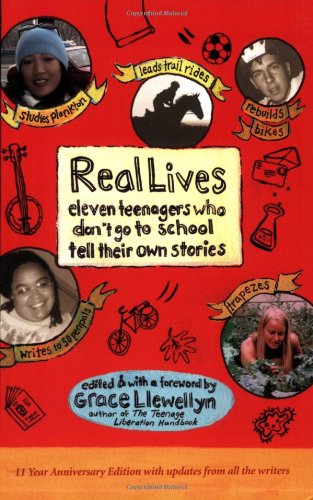 Real Lives: Eleven Teenagers Who Don't Go to School Tell Their Own Stories

Quantity: 1
View all  copies of this book
Buy New
Price: US$ 29.92 Convert Currency
Shipping: US$ 3.00 Within U.S.A. Destination, rates & speeds
Add to basket

Synopsis:
In 1993, eleven homeschooled teenagers described their lives in rich detail, and Real Lives quickly became a homeschooling classic. Erin’s favorite teacher was her horse Nick, blind in one eye. Kyla flew to South America in September of what would have been her senior year—alone, except for her mountain bike. Jeremiah and his sister Serena published a newsletter on peace issues. Patrick, who hoped someday to design video games, had spent the past few years compiling portfolios of his writing and artwork. Rebecca worked at homeless shelters and, through Habitat for Humanity, built houses for people in need. Anne tended honeybees and plucked a bluegrass banjo. Ayanna kept pace with 50 pen-pals—mostly in Africa—while Kevin talked with people all over the world on his ham radio. Amanda performed with a violin quintet and worked through the mail with her writing mentor. Vallie answered questions at a marine science center; Tabitha answered the phone at a crisis line, and helped midwives at births.... ....Now those eleven homeschoolers have grown up and engaged the territory of adulthood, college, and career—and the new edition of Real Lives includes updates from all of them. From gaining admission to an Ivy League institution without taking the SAT to crafting a simple life centered on writing and gardening, they tell where life has taken them and where they have taken life, and offer hindsight and advice for others choosing to learn outside of school.
About the Author:
Grace Llewellyn taught school for three years before unschooling herself and writing The Teenage Liberation Handbook: How to Quit School and Get a Real Life and Education. Her other books include Real Lives: eleven teenagers who don’t go to school tell their own stories, Freedom Challenge: African American Homeschoolers, and, with Amy Silver, Guerrilla Learning: How to Give Your Kids a Real Education With or Without School. Ms. Llewellyn has spoken about unschooling to groups and conferences, given workshops, directed a homeschooling resource center, produced a mail order book catalog for unschoolers, and published an unschooling newsletter—all with the purpose of helping people (mostly teenagers) take more control of their own lives and educations. She is the founder and director of Not Back to School Camp (in Oregon and West Virginia) for unschooled teenagers, and enjoys a small bellydancing career on the side. She lives in Eugene, Oregon.

We are a small mountain bookstore located in the Appalachian mountains working to support our local community. Thank you for your support.


All returns will be accepted within 30 days.

All orders can be cancelled within 48 hours prior to shippment.


All books will be shipped within 48 hours via USPS.