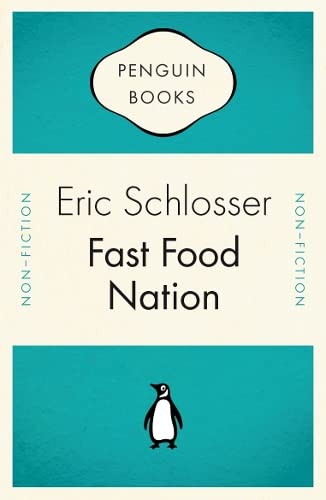 Quantity: 5
View all  copies of this book
Buy Used
Price: US$ 2.68 Convert Currency
Shipping: US$ 8.44 From United Kingdom to U.S.A. Destination, rates & speeds
Add to basket

The book has been read, but is in excellent condition. Pages are intact and not marred by notes or highlighting. The spine remains undamaged. Seller Inventory # GOR001177226

Synopsis:
Eric Schlosser has visited the state of the art labs where scientists recreate the flavours and smells of everything from cooked chicken to fresh strawberries in the test tube and he has spoken to workers at meatpacking plants with some of the worstsafety records in the world. He explores the links between Hollywood and the fast food trade, and the tactics used to target ever younger consumers. In a meticulously researched and powerfully argued account, "Fast Food Nation" reveals the full price of our appetite for instant gratification.
Review:
On any given day, one out of four Americans opts for a quick and cheap meal at a fast-food restaurant, without giving either its speed or its thriftiness a second thought. Fast food is so ubiquitous that it now seems as American, and harmless, as apple pie. But the industry's drive for consolidation, homogenization, and speed has radically transformed America's diet, landscape, economy, and workforce, often in insidiously destructive ways. Eric Schlosser, an award-winning journalist, opens his ambitious and ultimately devastating exposé with an introduction to the iconoclasts and high school dropouts, such as Harlan Sanders and the McDonald brothers, who first applied the principles of a factory assembly line to a commercial kitchen. Quickly, however, he moves behind the counter with the overworked and underpaid teenage workers, onto the factory farms where the potatoes and beef are grown, and into the slaughterhouses run by giant meatpacking corporations. Schlosser wants you to know why those French fries taste so good (with a visit to the world's largest flavor company) and "what really lurks between those sesame-seed buns." Eater beware: forget your concerns about cholesterol, there is--literally--feces in your meat.

Schlosser's investigation reaches its frightening peak in the meatpacking plants as he reveals the almost complete lack of federal oversight of a seemingly lawless industry. His searing portrayal of the industry is disturbingly similar to Upton Sinclair's The Jungle, written in 1906: nightmare working conditions, union busting, and unsanitary practices that introduce E. coli and other pathogens into restaurants, public schools, and homes. Almost as disturbing is his description of how the industry "both feeds and feeds off the young," insinuating itself into all aspects of children's lives, even the pages of their school books, while leaving them prone to obesity and disease. Fortunately, Schlosser offers some eminently practical remedies. "Eating in the United States should no longer be a form of high-risk behavior," he writes. Where to begin? Ask yourself, is the true cost of having it "your way" really worth it? --Lesley Reed

In 2002, World of Books Group was founded on an ethos to do good, protect the planet and support charities by enabling more goods to be reused. Since then, we've grown into to a global company pioneering the circular economy. Today, we drive the circular economy through three re-commerce brands: - Wob: Through Wob, we sell. We provide affordable, preloved books and media to customers all over the world. A book leaves our collection of over seven million titles and begins a new chapter every two seconds, enabling more goods to be reused. - Ziffit: Through Ziffit, we buy. We give people around the world the opportunity to contribute to the circular economy, earn money and protect the planet, by trading their unwanted books and media. - Shopiago: Through Shopiago, we help others. By sharing the technology that has grown World of Books Group into the business it is today, we?re helping charities increase revenue and reduce waste through re-commerce.


WorldofBooks.com fully embraces the AbeBooks terms and conditions and we will do
what we can to resolve any issues.