Items related to Walker's Mammals of the World (2-Volume Set) 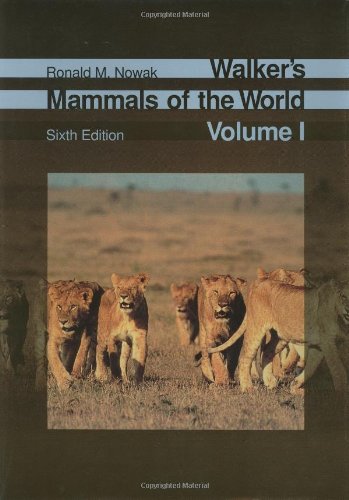 Quantity: 1
View all  copies of this book
Buy New
Price: US$ 34.99 Convert Currency
Shipping: US$ 3.00 Within U.S.A. Destination, rates & speeds
Add to basket

From aardwolves and bandicoots to yapoks and zorillas, Ernest P. Walker's Mammals of the World is the most comprehensive―the pre-eminent―reference work on mammals. Now, completely revised and updated, this fascinating guide is better than ever. Providing a complete account of every genus of mammal in all historical time, the sixth edition is 25 percent longer than its predecessor. Of the previous generic accounts, 95 percent have been substantively modified, and there are 80 new ones―among them, three remarkable, large ungulates recently discovered in the forests of Indochina. New also is a full account of the woolly mammoth, now known to have survived until less than 4,000 years ago.

Each section of the book describes one genus and includes facts such as scientific and common names, the number and distribution of species, measurements and physical traits, habitat, locomotion, daily and seasonal activity, population dynamics, home range, social life, reproduction, and longevity. Textual summaries present accurate, well-documented descriptions of the physical characteristics and living habits of mammals in every part of the world. As in the last two editions, the names and distributions of every species of every genus are listed in systematic order. These lists have now been cross-checked to ensure coverage of all species in the comprehensive new Smithsonian guide, Mammal Species of the World. Facts on the biology of mammals have been brought together from more than 2,700 newly cited references, nearly all published in the last decade. Also new are the latest data on reproduction, longevity, fur harvests, numbers in the wild and in captivity, and conservation status. The sixth edition also records all official classifications of every mammal species and subspecies in the massive 1996 IUCN Red List of Threatened Animals.

The illustrations―more than 1,700―include virtually every genus of mammal. Among them are pictures by such noted wildlife photographers as Leonard Lee Rue III, Bernhard Grzimek, David Pye, and Warren T. Houck. Mammals pictured here for the first time include the just-discovered giant muntjac deer of Viet Nam, a rodent known only from the Solomon Islands, a large fruit bat whose male suckles the young, and an extremely rare web-footed tenrec of Madagascar.

Since its publication in 1964, Walker's Mammals of the World has become a favorite guide to the natural world for general readers as well as an invaluable resource for professionals. This sixth edition represents more than half a century of scholarship―Ernest P. Walker himself devoted more than thirty years to the original project―and remains true to Walker's vision, smoothly combining thorough scholarship with a popular, readable style to preserve and enhance what the Washington Post called "a landmark of zoological literature."

Turn the page of destiny. The power is inside of you.


All books are shipped within 48 hours via usps