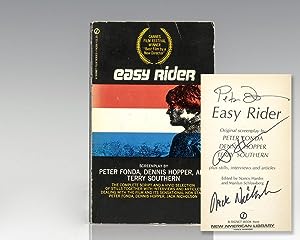 First edition of the complete script, with a selection of black white and color stills, interviews and articles. Octavo, original wrappers as issued, illustrated. Boldly signed by Peter Fonda, Dennis Hopper, and Jack Nicholson on the title page. Edited by Nancy Hardin and Marilyn Schlossberg. In near fine condition which shows light wear. Rare and desirable signed by the three stars of this iconic film. The novel written after the classic film, Easy Rider is a milestone in counterculture film-making. The St. Louis Post-Dispatch appropriately described it in 2001 as a "touchstone for a generation[that] captured the national imagination." Easy Rider is a landscape portrait of the 1960's societal tensions: the hippie movement, drug use, and communal lifestyle. The film is infamous for its use of real drugs and other substances (Easy Rider: Shaking the Cage, 1999). Bookseller Inventory # 99857

Book Description Columbia Pictures, Culver City, CA, 1969. Vintage oversize borderless reference photograph from the 1969 film, showing Peter Fonda chatting up Sabrina Scharf, with Dennis Hopper making his own connection in the background. With the stamp of Tele-Cine on the verso. About as close to the very start of the New Hollywood era as can be imagined. Dennis Hopper's directorial debut had its world premiere at Cannes, on May 8, 1969, but would not debut in the US until July 1969, in a significantly edited form. Nominated for two Academy Awards for Best Screenplay and Best Supporting Actor for Jack Nicholson. Set and shot on location throughout California, New Mexico, Arizona, Louisiana, and Utah. 10 x 8 inches. Very Good plus, slightly curled with a few light creases throughout. National Film Registry. Ebert III. Criterion Collection 545. Seller Inventory # 149384

Book Description Alfieri, N.p., 1969. Vintage oversize double weight color photograph of Dennis Hopper and Jack Nicholson, at an outdoor press conference held in front of the Carlton Hotel at the Cannes Film Festival, where Hopper was awarded the Cannes First Film Prize. Shot by Marc Alfieri, and signed by him in black ink at the lower left margin: "Photo Alfieri / Cannes / FIF 69." Also with Alfier's stamp on the verso, and a holograph ink notation: "Festival.69. / 4903." About as close to the very start of the New Hollywood era as can be imagined. "Easy Rider" had its world premiere at Cannes, on May 8, 1969. It would not debut in the US until July 1969, in a significantly edited form. 9.25 x 12.25 inches. In a museum quality frame. Fine. Seller Inventory # 135613