Items related to The Holiday Makers: Magazines, Advertising, and Mass... 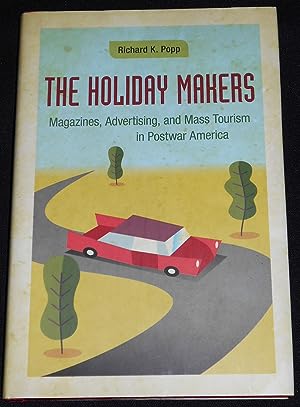 AbeBooks Seller Since May 1, 2012 Seller Rating

ix, [3], 204 p.: illustrations; 24 cm. Red cloth with gilt spine title. Illustrated dust jacket. Inscribed by the author on the front free endpaper, June 2012. In The Holiday Makers, "the magazine industry serves as a window into postwar media and consumer society, showing how the dynamics of market research and commercial print culture helped shape ideas about place, mobility, and leisure. . . . Ultimately, Popp contends, the selling of tourism in postwar America played an early, integral role in the shift toward lifestyle marketing, an experiential service economy, and contributed to escalating levels of social inequality." -- dust jacket. Book is in Fine Condition: clean and tight. Dust jacket is in Fine Condition: clean and bright (the light random spotting is printed--every copy has this). Seller Inventory # 007973

In mid-twentieth-century America, mass tourism became emblematic of the expanding horizons associated with an affluent, industrial society. Nowhere was the image of leisurely travel more visible than in the parade of glossy articles and advertisements that beckoned readers from the pages of popular magazines. In Richard K. Popp's The Holiday Makers, the magazine industry serves as a window into postwar media and consumer society, showing how the dynamics of market research and commercial print culture helped shape ideas about place, mobility, and leisure.
Magazine publishers saw travel content as a way to connect audiences to a booming ad sector, while middlebrow editors believed sightseeing travel was a means of fostering a classless society at home and harmony abroad. Expanding transportation networks and free time lay at the heart of this idealized vision. Holiday magazine heralded nothing less than the dawn of a new era, calling it "the age of Mobile Man -- Man gifted, for the first time in history, with leisure and the means to enjoy distance on a global scale." For their part, advertisers understood that selling tourism meant turning "dreams into action," as ad executive David Ogilvy put it. Doing so involved everything from countering ugly stereotypes to tapping into desires for "authentic" places and self-actualization.
Though tourism was publicly touted in egalitarian terms, publishers and advertisers privately came to see it as an easy way to segment the elite free spenders from the penny-pinching masses. Just as importantly, marketers identified correlations between an interest in travel and other consumer behavior. Ultimately, Popp contends, the selling of tourism in postwar America played an early, integral role in the shift toward lifestyle marketing, an experiential service economy, and contributed to escalating levels of social inequality.

Between the 1930s and 1960s, the spread of new transportation networks and the democratization of paid vacations struck many observers as a sign that tourism was growing into a folkway of modern American life. Easy mobility and free time lay at the heart of this idealized vision, and vacations were seen as a ritualized expression of the movement and egalitarianism that characterized midcentury modernity. The Holiday Makers tells the story of how advertisers sold tourist travel in popular magazines during this era, transforming consumer culture in the process.

With over a half-century of experience in working with books and manuscripts, we have a large and expanding stock, focusing primarily, but by no means exclusively, on 16th- to mid-19th-century books in English, French, and German in the fields of history, travel, and the arts, and children's books; late 19th- and early 20th-century military prints and postcards; and manuscripts, deeds, maps, and printed ephemera of all periods and disciplines.


We guarantee the condition of every book as described on the Abebooks web sites. If you're dissatisfied with your purchase (Incorrect Book/Not as Described/Damaged) or if the order hasn't arrived, you're eligible for a refund within 30 days of the estimated delivery date. If you've changed your mind about a book that you've ordered, please use the "Ask bookseller a question" link to contact us and we'll respond within 2 business days.


Orders usually ship within 1 business days. Shipping costs are based on books weighing 2.2 LB, or 1 KG. If your book order is heavy or oversized, we may contact you to let you know extra shipping is required.