Items related to THE MORAL COMPASS, Stories for a Life's Journey. 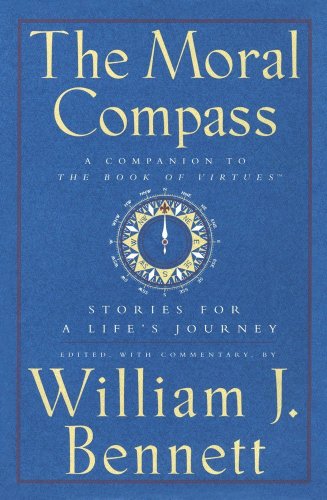 THE MORAL COMPASS, Stories for a Life's Journey.

AbeBooks Seller Since May 13, 1999 Seller Rating

Quantity: 1
View all  copies of this book
Buy Used
Price: US$ 131.25 Convert Currency
Shipping: US$ 4.45 Within U.S.A. Destination, rates & speeds
Add to basket

Title: THE MORAL COMPASS, Stories for a Life's ...

The prominent conservative and author of the best-selling, The Book of Virtues presents a second selection of spiritually and morally uplifting literature, organized according to the stages on life's way. 500,000 first printing. National ad/promo. Tour.

William J. Bennett served as Director of the Office of National Drug Control Policy under President George H. W. Bush and as Secretary of Education and Chairman of the National Endowment for the Humanities under President Reagan. He holds a bachelor of arts degree in philosophy from Williams College, a doctorate in political philosophy from the University of Texas, and a law degree from Harvard. He is the author of such bestselling books as The Educated Child, The Death of Outrage, The Book of Virtues, and the two-volume series America: The Last Best Hope. Dr. Bennett is the host of the nationally syndicated radio show Bill Bennett's Morning in America. He is also the Washington Fellow of the Claremont Institute and a regular contributor to CNN. He, his wife, Elayne, and their two sons, John and Joseph, live in Maryland.

Michigan's largest (and one of the largest in the US) used & rare bookstore with close to a million books in stock. We've been in business selling books for over 40 years. While the majority of the books in stock are not online, we will be happy to search our store for any wants. Visit our website at www.rarebooklink.com. Ranked #2 in the world by BusinessInsider.com (2014).