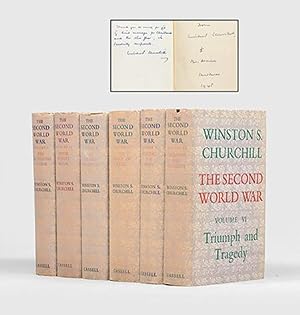 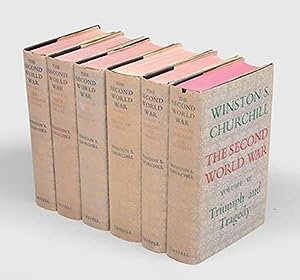 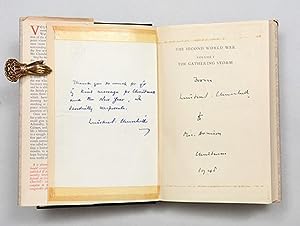 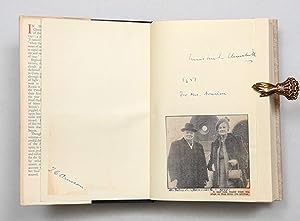 We're sorry; this specific copy is no longer available. Here are our closest matches for The Second World War. by CHURCHILL, Winston S..

6 volumes, octavo. Original black cloth, titles gilt to spines, grey endpapers decorated with a design that alternates a lion rampant with the initials W.S.C., top edges red. In the typographical dust jackets with background design as per the endpapers. Housed in two red quarter morocco plush-lined book-style folding boxes by Asprey, title gilt to spines, raised bands, dotted gilt roll, rampant lion, linked "Cs", and portcullis devices to the first, fifth and sixth compartments respectively. Cloth clean and with very little of the spotting endemic to the title, front hinge of volume I just starting, the others remain tight, some light toning of the book blocks, the jackets just a little rubbed, spines mildly sunned, but the red titles still legible, a few minor nicks or closed tears and small chips, but overall a well-cared-for set, very good indeed. Maps and diagrams, some folding. First editions, first impressions, of Churchill's masterpiece, signed or inscribed contemporarily in each volume, and exceptionally uncommon thus. The set was presented to Theresa Arnison, who with her husband Rowland, was a stalwart of the Woodford Conservative Association. Vol. I, inscribed on the half-title: "From Winston S. Churchill to Mrs. Arnison, Christmas, 1948", and with facsimile holograph "thank you" slip taped to verso of front free facing: vol. II, Christmas card taped to the front free endpaper, printed greeting, signed by Churchill on the first blank, Arnison's ownership inscription, "T[heresa] C[atherine] Arnison", on verso of front free: vol. III, inscribed by Churchill on the first blank, "Winston S. Churchill, 1951, for Mrs. Arnison", above mounted newspaper picture of Winston and his wife Clementine, Arnison's ownership inscription verso of front free facing: vol. IV inscribed, "To Mrs. Arnison from Winston S. Churchill, 1951" above the band from an Aroma de Cuba cigar taped to the first blank, related newspaper clipping tipped onto the half-title: vol. V, inscribed "Inscribed by Winston S. Churchill, 1953" on half-title: vol. VI inscribed on the first blank, "Inscribed for Mrs. Arnison by Winston S. Churchill, 1954", Arnison's ownership inscription to the front flap of the jacket. Churchill was MP for Woodford from 1945 to 1964, and Clementine was the President of the Woodford Conservative Association. They were closely linked with the Arnisons: Rowland, the managing director of a scientific instrument company, was Chairman of the Association, and Theresa was the Chairwoman of the Women's Advisory Committee of the Association. The Churchills knew well the importance of the political spouse. Despite campaigning vigorously in his own constituency at election time, such was Winston's prestige that he was in great demand to bolster the campaigns of other candidates, so he was frequently called away. In his absence, Clementine and Rowland ran the campaign in Woodford; Rowland recalled the influence of Clementine: "It is wrong to assume that Sir Winston's eminence as a world statesman makes his Parliamentary election automatic. We never take his victory for granted. That is why his wife's work during election time is a tower of strength to her husband as at all other times  No man knows more about fighting an election than Winston, for there is no man living who has been a candidate more often. His wife is of tremendous importance to him as a candidate. Though as President of the Woodford Conservative Association, she naturally takes a close interest in all constituency matters, her most important role is at election time when she plays a personal part in every phase of the campaign  Many of our divisional meetings end with a call of 'Three cheers for Churchill!' Whereupon he will come forward and, with his broadest smile, call for another three for his wife" (Fishman, p. 342). Through their work together on these campaigns the couples became firm friends. Correspondence between Churchill and the Arnisons is preserved in the Churc. Bookseller Inventory # 137316

Book Description Penguin 12/12/1985, 1985. Condition: Good. Will be shipped promptly from UK warehouse. Book is in good condition with no missing pages, no damage or soiling and tight spine. There may be some dog-eared pages showing previous use but overall a great book. Seller Inventory # 9053-9780140086133

Book Description Penguin Books Ltd, 1985. Paperback. Condition: Good. All orders are dispatched the following working day from our UK warehouse. Established in 2004, we have over 500,000 books in stock. No quibble refund if not completely satisfied. Seller Inventory # mon0005449777

Book Description Paperback. Condition: Good. This item shows signs of wear from consistent use, but it remains in good condition and works perfectly. All pages and cover are intact , but may have aesthetic issues such as small tears, bends, scratches, and scuffs. Spine may also show signs of wear. Pages may include some notes and highlighting. May include From the library of labels. Satisfaction Guaranteed. Seller Inventory # 4BQIXZ0004BP_ns

There are 1647 more copies of this book

View all search results for this book
More Books