Items related to The American Porch: An Informal History of an Informal... 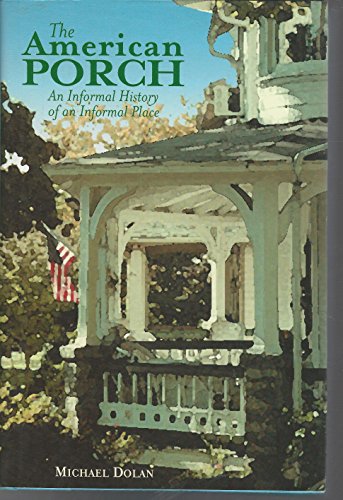 The American Porch: An Informal History of an Informal Place

Title: The American Porch: An Informal History of ...

A fascinating look at an American institution--a place where public life meets private.

Like the pivotal clue in a Conan Doyle story, the American porch hides itself in plain sight. But it is a national treasure, one that has long awaited the attention of a fine writer like Michael Dolan. In careful, spirited prose, Dolan relates the colorful and surprising history of the porch, starting with the ancient Greeks. George Washington makes his appearance, as Dolan describes how the amateur architect and nation builder may have happened upon a porch in Barbados and brought the concept back to Mount Vernon. But the story is far older and more complex than that, and since those days the porch's popularity has risen and fallen and risen again. Dolan shows how the porch evolved into an icon of Americana, from plantation days to the new urbanism. Dolan's narrative isn't purely intellectual. He revived the front porch on his house in his hometown of Washington, D.C., designing and overseeing construction of a classic four-pillared porch to grace his 1926 bungalow, complete with lacquered ceiling, overhead fan, and restored metal glider. The story of that porch's decay and restoration not only inspired the book but serves as a touchstone in the author's story as well. (6 x 9, 352 pages, color photos)Michael Dolan has written for The New Yorker, Slate, Outside, The New York Times Magazine, The Washington Post, and other publications. His documentary script and production credits include many television programs aired by National Geographic Explorer and the Discovery Channel. He lives in Washington, D.C., with his wife and son.