Items related to Atlanta Rising: The Invention of an International City... 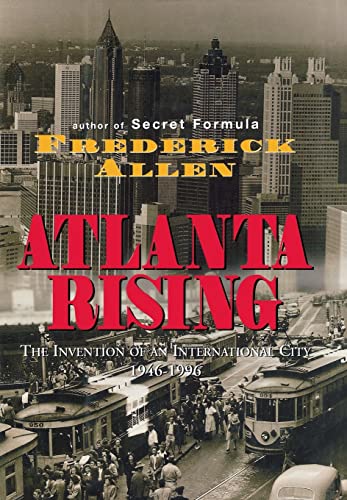 Atlanta Rising: The Invention of an International City 1946-1996

Quantity: 1
View all  copies of this book
Buy Used
Price: US$ 15.99 Convert Currency
Shipping: US$ 4.99 Within U.S.A. Destination, rates & speeds
Add to basket

Title: Atlanta Rising: The Invention of an ...

For visitors and recent arrivals, Atlanta Rising, will serve as the essential primer on the ins and outs of the South's capital city. For natives, the book offers up a rich menu of surprising new facts and fresh insights about their own hometown.

Frederick Allen was an award-winning reporter and political columnist with the"Atlanta Journal-Constitution"from 1972 to1987, after which he joined CNN asa chiefanalyst and commentator covering the 1988 presidential election. His essays for the program "Inside Politics" earned CNN a CableACE Award, and Allen was called the bestpolitical analyst by the editors of the "Hotline". Allen is the author of three books, including his history of the Coca-Cola Company, "Secret Formula";"Atlanta Rising", a history of modern Atlanta; and "A Decent, Orderly Lynching", an account of the vigilantes of Montana. He was honored by the Western History Association with the inaugural Michael P. Malone Award for his research into vigilante symbolism, and is currently working on a book about Theodore Roosevelt. Allen graduated from Phillips Academy (Andover) and earned a BA in journalism from the University of North Carolina, Chapel Hill. He and his wife, Linda, live in Atlanta, Georgia, and Big Sky, Montana.

We are located in at 231-A Broad Street in historic downtown Rome, Georgia. We have over 20,000 Used & Rare books.


We accept Visa, Mastercard, Discover, American Express, Paypal, checks, and
money orders. We carefully wrap and package all books and ship them via the US
Postal Service. Books are described as accurately as possible using ABE
condition guidelines.

Dogwood Books, LLC is located at 240 Broad Street in Rome, Georgia, USA. The
owner is Kenneth Studdard and he may be contacted at dogwoodbooks@comcast.net or
(706) 235-2660.