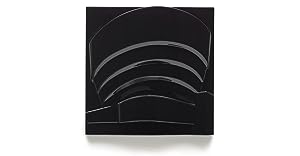 Save for Later
From Shapero Rare Books (London, United Kingdom)

Perspex form, vacuum formed acrylic and spray painted black, 1970, signed and dated verso, from the edition of 106, although an edition of 750 was planned it was not fully executed, published by xartcollection, Zurich., 59 x 59 x 9.8cm. Framed 76 x 76 x 15 cm. In 1970 British-Pop artist Richard Hamilton was invited to produce an edition of 750 small-scale multiples of the Guggenheim. The intention was to produce vacuum-form reliefs in Perspex and offset the costs of expensive molds by creating a large edition. In the end, the project proved more technically difficult than anticipated. Of the three colours (black, white and chrome), only a total of 271 were realised, 106 in black. The xartcollection was created in 1968 in Zurich, Switzerland by Sandro Bocola and three partners: Heinz Bütler, Rolf Fehlbaum and Erwin Meierhofer. Xartcollection's concept was to industrially produce three-dimensional "Multiples" in limited and signed editions. The company's philosophy was to make Contemporary Art available to a large public. Internationally renowned artists such as Max Bill, Richard Hamilton, Allen Jones, Joe Tilson, Peter Philips, Getulio Alviani among others others participated in this project. Most of xartcollection's "Multiples" were produced by the firm of Reif, Relo-Kunststoffe in Lörrach, Germany. Despite its international reputation the company went bankrupt and was dissolved in 1973. Lulin M3. Seller Inventory # 101127

Specialists in Antiquarian Travel Books; Fine Illustrated & Colour Plate Books including Natural History; Literature and Children's Books; Russian and Eastern European Books; Judaica and Hebraica, alongside books of importance across other fields. We have possibly the largest selection of Baedeker and other Travel Guides and our Print Gallery has an enormous selection covering every topic of Antique Prints including Maps and Photographs. Please visit us at http://www.shapero.com


The condition of all books has been described; all items are guaranteed to be complete unless otherwise stated. Invoices will be rendered in Sterling. The title of goods does not pass to the purchaser until the invoice is paid in full.