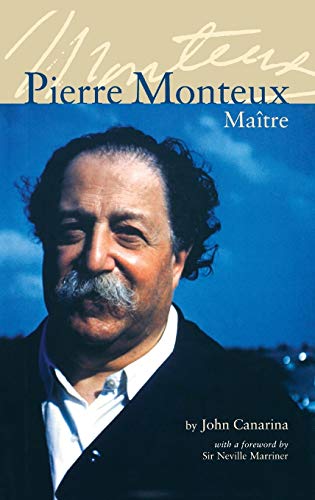 Quantity: 1
View all  copies of this book
Buy Used
Price: US$ 29.00 Convert Currency
Shipping: US$ 5.00 Within U.S.A. Destination, rates & speeds
Add to basket

Pierre Monteux became famous at the age of 38 for conducting the riotous world premiere of Igor Stravinsky's Rite of Spring in Paris on May 29, 1913. The composer, fearing bodily harm, escaped through a backstage window, while the imperturbable conductor persisted, forever to be identified with the event. He would also conduct the first concert performance and one of the first two recordings of Stravinsky's masterpiece, the other one conducted by Stravinsky himself. Though French by birth, the distinctively portly man with the walrus mustache resisted being typecast as a French conductor. He could have been a European maestro: he played for Brahms, worked with Grieg, presided over the world premieres of major works by Ravel, Stravinsky and many others, was Diaghilev's conductor of choice. But it was Monteux's American audiences, especially in San Francisco and Boston, who would love him the most over the course of a long career. He conducted many American premieres, works of Debussy, Falla, Ravel, and among the more than a dozen Boston premieres, those of The Rite of Spring and of Mahler's First Symphony. Canarina, a conductor and teacher of conducting himself, studied with Monteux for seven summers and brings great personal warmth and understanding to this wise, admiring and honest book, the first full-length biography of the man whom so many knew and loved as “Maitre.”

John Canarina was a student of Pierre Monteux at L'Ecole Monteux from 1953 to 1957 and again in 1961. A graduate of the Juilliard School of Music, he has been conductor of the Seventh Army Symphony Orchestra, assistant conductor of the New York Philharmonic, music director of the Jacksonville Symphony Orchestra, and, since 1973, director of Orchestral Studies at Drake University in Des Moines, Iowa. Also active as a writer and critic, he is the author of Uncle Sam's Orchestra: Memories of the Seventh Army Symphony. (1998).