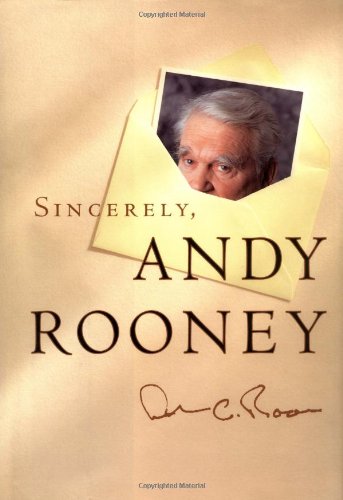 Quantity: 1
View all  copies of this book
Buy New
Price: US$ 23.00 Convert Currency
Shipping: US$ 4.00 Within U.S.A. Destination, rates & speeds
Add to basket

This is an assemblage of Rooney's innumerable and thoughtfully (mostly) sassy (always) letters responding to government and business folk, viewers of 60 Minutes , organizations asking him for a speaking engagement, lawyers, friends, those interested in religious matters, and others. And the letters are arranged into sections according to the type of recipient. Letters that prompted Mr. Rooney's replies are not listed (though Rooney's style allows one to easily understand the original letter's gist). No notes or index, but there seems little need for either. Annotation c. Book News, Inc., Portland, OR (booknews.com)

Cantankerous cultural icon Andy Rooney has come up with a twist on a concept for his latest book: instead of printing letters that people have written to him, he has collected his own responses, prefaced with occasional editorial notes to get the reader up to speed. All together, they make an interesting chronicle of his career, spanning everything from his missive to CBS management's 1950 request to swear that he had never been a member of the Communist party to his response to a modern conspiracy theorist. Rooney is at his best when his sly deadpan humor comes out, as when he replies to the editor of a celebrity cookbook with a recipe for baked potato ice cream. Just as enjoyable for other reasons are the pieces in which he becomes almost breathtaking in his cussedness, stubbornly waging an extensive battle against the New York State Department of Taxation and Finance and mercilessly ripping apart the letters of a fifth-grade class. Regular viewers of 60 Minutes will be gratified to see that even in short letters, Rooney has a tendency to take sudden detours into his trademark quotidian observations ("Of all the postal abbreviations, MI is the worst."). Less frequent but more prominent are his forays into the maddeningly illogical, as when he refuses to understand why being a homosexual is not the same kind of risky behavior as being a cigarette smoker, or when he defends his linguistically naive statement that English is "better" than other languages. Ah, but that's all part of his peculiar charm, isn't it? --Ali Davis