Wild & Homeless Books has been trading from 12 South Street, Bridport, Dorset since February 2009. The current mismanagement team, who have been involved with the shop pretty much since opening, have been sitting in the big chair since Bastille Day 2016 and now have about 60 years of book trade experience between them in one form or another. The shop itself is situated on two floors of a listed (and listing) building in Bridport's town square and contains a ridiculous number (according to our surveyor) of secondhand books. We try to carry a good general stock and do not specialise as such, although we're on reasonably good ground when it comes to Railways and Cricket. We are also stockists of Wild Swan railway titles, now being published in Bath by Simon Castens, owner of the Titfield Thunderbolt transport bookshop. We are, by and large, open for business Monday to Saturday between 9.30 and 4.30, and are closed Sundays and Bank Holidays. We are occasionally closed due to ill-health, parenting responsibilities, Test Matches, and the phases of the moon. Please check if travelling specifically to visit. All of this rich pageant is watched over by a larger than life-sized print of Audrey Hepburn and a semi-sentient 1950s valve radio called The Behemoth. 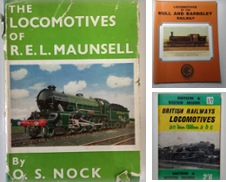 All UK postage is free. All overseas postage is at cost, our ABE postage cost matrix should be used as a guide, rather than a definitive price