Items related to If women counted: A new feminist economics 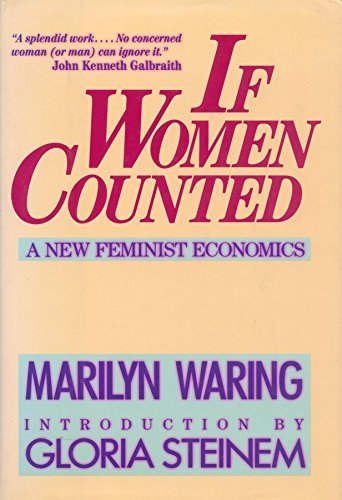 This is a revolutionary and powerfully argued feminist analysis of modern economics, revealing how woman's housework, caring of the young, sick and the old is automatically excluded from value in economic theory. An example of this pervasive and powerful process is the United Nation System of National Accounts which is used for wars and determining balance of payments and loan requirements. The author has also written "Women, Politics and Power" and is a formidable force in the politics of New Zealand, serving three terms in Parliament and helping bring down a Prime Minister. She holds a doctorate in political economy and was a visiting Fellow at Harvard's Kennedy School of Government.

The United Nations System of National Accounts (UNSNA) forms the basic national account statistics used in annual reports from agencies such as the World Bank and the International Monetary Fund. Waring, a feminist, environmental advocate, and member of the New Zealand Parliament from 1975-84, charges that UNSNA acts to sustain the institutionalized enslavement of women by focusing solely on production and consumption in the market sphere, thereby rendering women's unpaid work invisible. While her book is more polemic than academic, Waring has nonetheless amassed an amazing amount of statisticcal detail to support her thesis, and she shows formidable skill in synthesizing the thoughts of others for her cause. This is an important book for all women's studies and economics collections.
- Christy Zlatos, Auburn Univ. Lib., Ala.
Copyright 1989 Reed Business Information, Inc.