Items related to Forever: A Novel 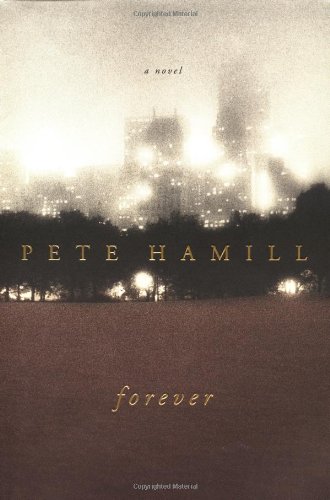 Moving from Ireland to New York City in 1741, Cormac O'Connor witnesses the city's transformation into a thriving metropolis while he explores the mysteries of time, loss, and love. By the author of Snow in August and A Drinking Life. 150,000 first printing.

Pete Hamill is a novelist, journalist, editor, and screenwriter. He is the author of 15 previous books, including the bestselling novel "Snow in August" and the bestselling memoir "A Drinking Life." He writes a daily column for the "New York Daily News" and lives in New York City.

From the first plaintive, languorous sounds of a wind instrument, the canvas opens wide on a cultural struggle--on the intertwined history of a nation and a city--and on a robust adventure tale enveloped in myth. Hamill's saga covers a writer-artist's life well lived over four centuries, from the great good Irish house of his infancy to the canyons and towers of his adulthood in present-day New York City. It's a sprawling epic of ven-geance, whose various strands and themes are carefully balanced in this abridgment. Giving a gentle Irish lilt to the dialogue and effortlessly assuming the vocal patterns of other languages and genders, Stevie Ray Dallimore entices the listener as the drama shifts from swashbuckling tale to urban chronicle and as reality and fantasy blend. Hamill's personal insights into his work and his life, intoned on the final disc, offer a meaningful coda to his story. M.J.B. © AudioFile 2003, Portland, Maine-- Copyright © AudioFile, Portland, Maine