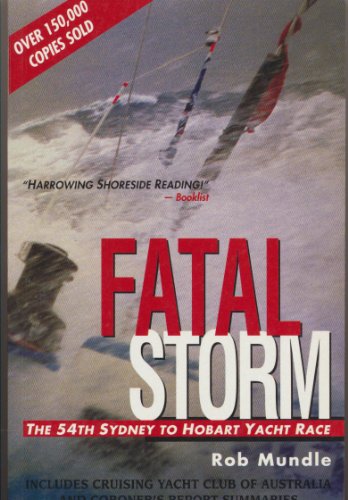 In the world of competitive off-shore sailing, Christmas Day is thought of as Boxing Day Eve--that is, the eve of the annual Sydney-to-Hobart Race. One of the world's three major offshore races (along with the Fastnet out of England and America's Newport Race to Bermuda), the 630-mile course from Sydney, Australia, to Hobart, Tasmania, is a test of skills, guts, and endurance in notoriously unpredictable, fickle waters--and in any weather.

On Boxing Day, 1998, the 115 boats jockeying at the starting line off Sydney's Nielsen Park Beach had been warned that low-pressure weather systems were conspiring to guarantee a wild and chancy race. Yet few sailors anticipated the ferocity of the storm that descended around two o'clock the next morning, whipping up gale-force winds and waves tall enough to send 25-ton yachts "spearing into midair," then "plunging down into the trough ... like repeatedly launching a truck off a 30-foot ramp and awaiting the crash." The race quickly devolved into the worst sailing disaster in recent memory. Seven crews abandoned their boats. Over 50 sailors were rescued under near-impossible circumstances. Seven died, and five boats sank. Journalist Rob Mundle follows the dramatic struggles in Fatal Storm, skillfully re-creating from firsthand accounts the stories of bravery, luck, and folly that left a handful of sailors convinced they'd never go near the Hobart again. Yet as one veteran yachtsman lived to point out, "It's something you just have to do.... You can't be under the illusion at any time that it is safe." --Svenja Soldovieri

One of the world's three great ocean sailing competitions, the annual 630-mile race from Sydney, Australia, to Hobart, Tasmania, pits sailboats against the notoriously rough waters of Bass Strait and the Tasman Sea.

The 115 boats leaving Sydney Harbor on December 26, 1998 expected rough weather, ­­but the gale that caught the boats well at sea in the predawn hours of December 27 was anything but routine. The freak, unseasonal storm brought hurricane-strength winds, waves six stories high, and the worst sailing disaster in recent history. Seven boats were abandoned at sea and five sank. Fifty-seven sailors were rescued, plucked from the decks of broken boats or from the sea itself under impossible conditions. Six sailors died.

"The famous killer Sydney - Hobart Race has found its chronicler in Rob Mundle. An Australian journalist who was on the scene . . . Mundle's portrayals of courageous sailors and heroic rescuers fighting for their lives are as vivid as any I have read." --­­John Rousmaniere, author, Fastnet: Force 10