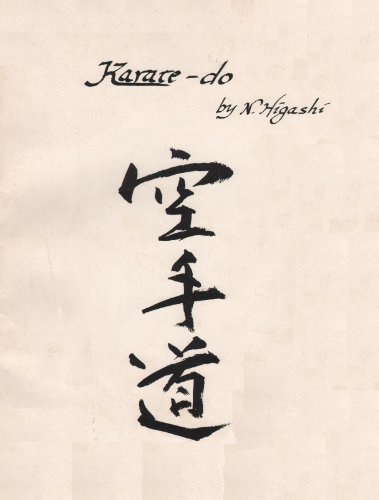 From the Preface: "In 1609, the Shimazu clan of Japan conquered the Okinawa prefecture. They then prohibited the use of weapons, so the people of Okinawa developed hand-to-hand fighting techniques. This is the origin of karate. In 1922, karate was first introduced to the main island of Japan by Gichin Funakoshi (the father of modern karate). Since then, karate has spread into many different styles with an accompanying development of skills and knowledge. As the basic principles of karate are the same everywhere, you may practice any style of karate, and if you train hard, you will, as a result, perform karate in the best tradition of the art. In the near future, karate will become unified and may become an Olympic sport. So, everyone should train hard, with diligence and patience, to being to truly understand the universal principles of karate."

This book is a crystal clear exposition of the basic principles of karate, with chapters on: what is karate, the bow (rei), promotion requirements, body parts as weapons, stances (tachi-kata), walking in stance (idou), basic techniques (kihon-waza), forms (kata), engaged free fighting techniques (yakusoku-kumite), and contest practice (shiai-keiko), with a glossary, bibliography, and promotion and tournament record form. This is the first English-language instruction manual by Sensei Nobuyoshi Higashi.

Nobuyoshi Higashi holds an 8th Dan in Judo from the Kodokan, a 10th Dan in Jujutsu, and 7th Dan in both Tomiki Aikido and Kokushi Karate. He is a renowned martial arts instructor.