Items related to The Battle for the Buffalo River: The Story of America's...

Home Compton, Neil The Battle for the Buffalo River: The Story of America's First ...
Stock Image 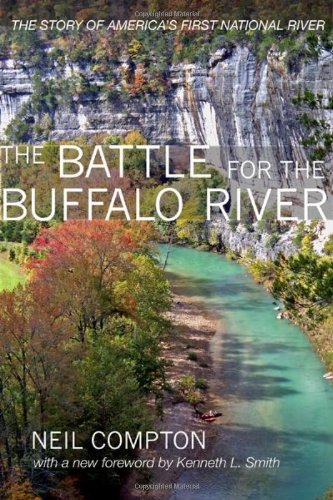 The Battle for the Buffalo River: The Story of America's First National River

Title: The Battle for the Buffalo River: The Story ...

Under the auspices of the 1938 Flood Control Act, the U.S. Corps of Engineers began to pursue an aggressive dam-building campaign. A grateful public generally lauded their efforts, but when they turned their attention to Arkansas’s Buffalo River, the vocal opposition their proposed projects generated dumbfounded them. Never before had anyone challenged the Corps’s assumption that damming a river was an improvement. Led by Neil Compton, a physician in Bentonville, Arkansas, a group of area conservationists formed the Ozark Society to join the battle for the Buffalo. This book is the account of this decade-long struggle that drew in such political figures as supreme court justice William O. Douglas, Senator J. William Fulbright, and Governor Orval Faubus. The battle finally ended in 1972 with President Richard Nixon’s designation of the Buffalo as the first national river. Drawing on hundreds of personal letters, photographs, maps, newspaper articles, and reminiscences, Compton’s lively book details the trials, gains, setbacks, and ultimate triumph in one of the first major skirmishes between environmentalists and developers.

â All of us who have been on it love it. It would be sheer desecration to destroy it by a dam or otherwise. It should be kept in perpetuity as a

remnant of the ancient Ozarks unspoiled by man. Its fast waters and its idyllic pools make it a bit of heaven on earth.â

â William O. Douglas, Associate Justice, U.S. Supreme Court
â The Buffalo River is no stranger to me. I hiked along its banks from Ponca to Jasper back in 1926 when I made a series of sketches about rural American life. Some of these sketches appeared in my book, An Artist in America. I love this country.â

â Thomas Hart Benton, Artist
â This book is a â must readâ for conservationists, canoeists, hikers, and all who simply enjoy a finely told story.â