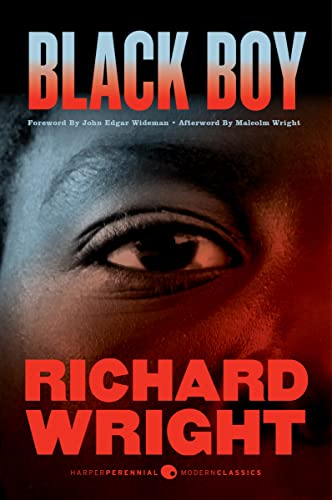 Black Boy (American Hunger): A Record of Childhood and Youth

Quantity: 2
View all  copies of this book
Buy New
Price: US$ 25.11 Convert Currency
Shipping: US$ 13.80 From United Kingdom to U.S.A. Destination, rates & speeds
Add to basket

Richard Wright's powerful and eloquent memoir of his journey from innocence to experience in the Jim Crow South—at once an unashamed confession and a profound indictment, Black Boy is a poignant and disturbing record of social injustice and human suffering. This 75th anniversary edition will have a beautiful new cover and will include a new introduction.

When Black Boy exploded onto the literary scene in 1945, it caused a sensation. Orville Prescott of the New York Times wrote that “if enough such books are written, if enough millions of people read them maybe, someday, in the fullness of time, there will be a greater understanding and a more true democracy.” Opposing forces felt compelled to comment: addressing Congress, Senator Theodore Bilbo of Mississippi argued that the purpose of this book “was to plant seeds of hate and devilment in the minds of every American.” From 1975 to 1978, Black Boy was banned in schools throughout the United States for “obscenity” and “instigating hatred between the races.”

The once controversial, now classic American autobiography measures the brutality and rawness of the Jim Crow South against the sheer desperate will it took to survive. Richard Wright grew up in the woods of Mississippi, with poverty, hunger, fear, and hatred. He lied, stole, and raged at those about him; at six he was a “drunkard,” hanging about in taverns. Surly, brutal, cold, suspicious, and self-pitying, he was surrounded on one side by whites who were either indifferent to him, pitying, or cruel, and on the other by blacks who resented anyone trying to rise above the common lot. The second half of the book focuses on Wright’s move north to Chicago, and his experiences with the Communist Party (a section that was pulled from the book’s original publication).

Black Boy is Richard Wright's compelling account of his journey. Deeply affecting and beautifully written, it is as timely today as when it was first published seventy-five years ago.

Richard Wright won international renown for his powerful and visceral depiction of the black experience. He stands today alongside such African-American luminaries as Zora Neale Hurston, James Baldwin, and Toni Morrison, and two of his novels, Native Son and Black Boy, are required reading in high schools and colleges across the nation. He died in 1960.