Items related to City of Laughter: Sex and Satire in Eighteenth-Century... 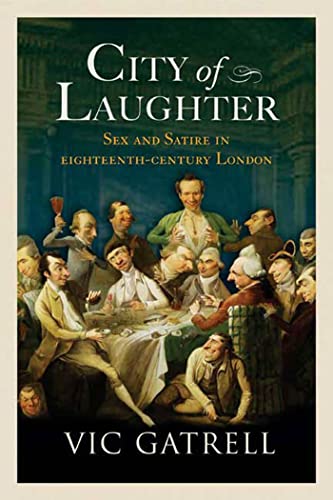 City of Laughter: Sex and Satire in Eighteenth-Century London

Title: City of Laughter: Sex and Satire in ...

Between 1770 and 1830, London was the world's largest and richest city, the center of hectic social ferment and spectacular sexual liberation. These singular conditions prompted revolutionary modes of thought, novel sensibilities, and constant debate about the relations between men and women. Such an atmosphere also stimulated outrageous behavior, from James Boswell's copulating on Westminster Bridge to the Prince Regent's attempt to seduce a woman by pleading, sobbing, and stabbing himself with a pen-knife. And nowhere was London's lewdness and iconoclasm more vividly represented than its satire.

City of Laughter chronicles the rise and fall of a great tradition of ridicule and of the satirical, humorous, and widely circulated prints that sustained it. Focusing not on the polished wit upon which polite society prided itself, but rather on malicious, sardonic and satirical humor―humor that was bawdy, knowing and ironic―Vic Gatrell explores what this tradition says about Georgian views of the world and about their own pretensions. Taking the reader into the clubs and taverns where laughter flowed most freely, Gatrell examines how Londoners laughed about sex, scandal, fashion, drink and similar pleasures of life.

Combining words and images–including more than 300 original drawings by Cruikshank, Gillray, Rowlandson, and others―City of Laughter offers a brilliantly original panorama of the era, providing a ground-breaking reappraisal of a period of change and a unique account of the origins of our attitudes toward sex, celebrity and satire today.

Vic Gatrell is a professor of British history at the University of Essex, a life fllow of Gonville and Caius College, and a member of the Cambridge history faculty. He lives in Cambridge.