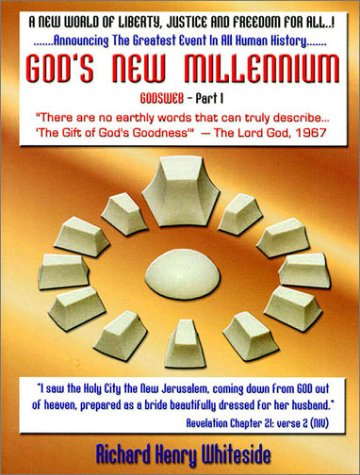 On May 1, 1967, 12:05 am, A tremendous Event of Major Importance took place late at night. GOD HIMSELF, while radiating tremendous Goodness and invisible, "glided" into the home of Richard Whiteside. At the time, Richard was reading the Bible in his easy chair, in his living room. GOD stopped in front of Richard, and placed HIS hands on his head. Then through his hands, GOD spoke a message, in english, to Richard, titled: "This is The Truth", followed by HIS 146+ word message. GOD then burned a line around Richard's hairline, around his head. It lasted the next seven years!(My wife saw it too.) Richard's life had suddenly changed instantly. Simular to anyone else who suddenly met GOD in Person! A wealth of information about GOD's plans for HIS New Millennium, is in this New Book: "God's New Millennium". This is a must for everyone to read. A second and a third book will follow this one, to complete the series. GOD's New Jerusalem City will start operations in 2012 A.D. GOD introduced HIS New Currency to all nations in 1988. All nations received a portion of the new currency, but did not acknowledge receiving it. Save your copy of this new book, it is worth one million WMF dollars on July 15, 2012 A.D., when turned in to a WMF Bank.

We consider this book as one of the greatest of all time. It presents GOD as HE was, and is, in all the Holy Writings. The Greatest GOD is all history has made three supernatural interventions, in 1967, 1969 and 1986. The author was a witness at these tremendous earth shaking events. GOD wants us all to join together and build HIS earthly Kingdom. This book was inspired by HIS Holy Spirit, who guided the author as he wrote. A new Holy City, The New Jerusalem, is to be built under GOD's own directions. Love GOD and HE will give you, "The Gift of GOD's Goodness". .......... Coming Soon... In Whiteside's next book, GOD'S WEB - Part 2 GOD's New Jerusaolem is shown coming to the USA! In the spring of 2001, the decision was made... Because of the new city's safety, GOD's New Holy City is to arrive in California!..."And I John saw The Holy City, New Jerusalem, coming down from GOD out of heaven, prepared as a bride adorned for her husband." ...Rev. 21:2 Coming Soon: GOD'S WEB - Part 2 (See God's own website, shown at the bottom of the page, on the back cover page of this book: "God's New Millennium") A photo copy of a "100 Trillion Dollar WMF Note" can be found on this website. After reading this book, you can volunteer too, to help build GOD's Kingdom! ...Contact Richard.