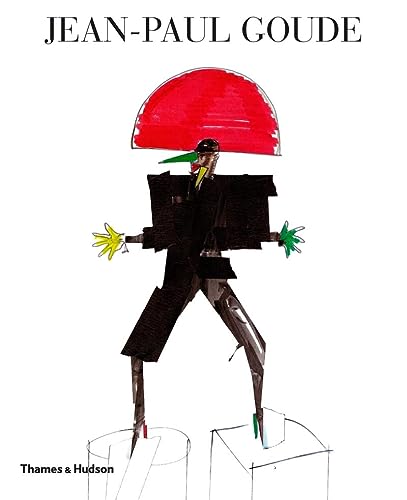 2012. 1st Edition. Paperback. Jean-Paul Goude is a modern legend in the world of commercial art. From his New York days with "Esquire" magazine to his latest work for Galeries Lafayette, he has consistently provoked and delighted those who have encountered his work. This title celebrates his creative zest and perfectionism, and his affinity for making fresh and engaging work. Num Pages: 432 pages, 600 colour illustrations. BIC Classification: AKB; AKTH. Category: (G) General (US: Trade). Dimension: 252 x 207 x 33. Weight in Grams: 1730. . . . . . Books ship from the US and Ireland. Bookseller Inventory # V9780500516041

Celebrates a major retrospective of the designer’s work at the Musée des ArtsDécoratifs in Paris.

Jean-Paul Goude is one of the world’s most brilliant and unorthodox image makers. This book assembles the biggest collection of his work ever seen: sketches, paintings, magazine spreads, storyboards, art-directed and elaborately staged photography, and photographic documentation (as well as preliminary sketches) for stage and street shows.

From his New York days with Esquire to his latest work for Galéries Lafayette in Paris, Goude has consistently surprised, provoked, and delighted those who have encountered his work. He was Grace Jones’s Pygmalion, creating unforgettable images of her, from andryogyne to cyber-superwoman to supreme diva. One of advertising’s most sought after stars, Goude masterminded memorable campaigns for Chanel, Perrier, and Kodak, among others.

Around 500 images, including many working documents, are on show here, from inspired doodles to final images. Selected and arranged by Goude himself, they present a gallery of artworks that have redefined advertising and brand photography as we know them.

500+ illustrations About the Author:

Jean-Paul Goude has worked at the forefront of commercial art, advertising and illustration for over three decades. From his time as art director at Esquire, to his unforgettable photographs of Grace Jones, to his advertising work for Chanel, Kodak, Cacharel and the Galeries Lafayette, and even to his work with the latest supermodels―Goude has triumphantly captured, time after time, the spirit of his age. He is the author of So Far So Goude, The Goude Touch, and Jean-Paul Goude.