Items related to The Jerusalem Problem: The Struggle for Permanent Status 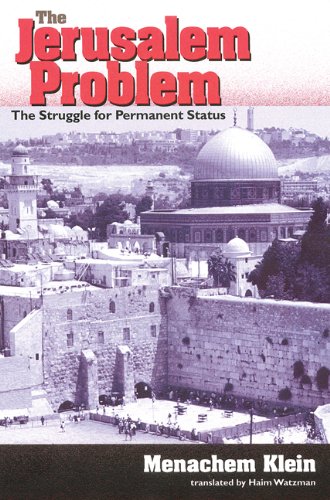 The Jerusalem Problem: The Struggle for Permanent Status

Title: The Jerusalem Problem: The Struggle for ...

Translated by Haim Watzman
"A unique account of a complex and subtle negotiation about the most disputed city in the world. Its point of view is clear, but it is nonetheless a balanced presentation. In place of generalizations it tries to get at what really happened."--David Matz, University of Massachusetts, Boston
"Anyone concerned with the horrible violence between Palestinians and Israelis will want to read this fascinating, behind-the-scenes account of the negotiations that preceded the violence, and why they failed. It was like a thriller that I could not put down, even though I knew the gory ending."--Joel S. Migdal, University of Washington

Assessing one of the most serious issues of our day, Menachem Klein  is the first to employ rigorous research to analyze all sides of official negotiations over Israeli-Palestinian territorial disputes. He focuses especially on the Camp David talks of 2000 and the Taba talks of 2001 and on discussions of the future of Jerusalem, offering a clear balance sheet of what went right, what went wrong, and what remains of the failed peace process.

Klein, an advisor to the Israeli team during the Camp David talks and a member of several Israeli-Palestinian diplomacy groups, argues that the negotiations themselves created a negative dynamic and that the violent outcome was neither inevitable nor entirely determined by the personalities of their participants. He maintains that the Israeli and Palestinian negotiators and leaders interacted destructively and that the American interaction with each side was detrimental; the prevailing strategy was one that set out lines that could not be crossed, instituting a style of bargaining that stymied negotiations. While all three parties shattered long-held preconceptions about how issues should be resolved, the talks ended in bloodshed. Moreover, neither side has ever drafted a single definitive document delineating what was understood and said at Camp David.

Beginning with the opening of the official permanent status talks, which sparked strong initial hopes, Klein tracks diplomacy on all sides from 1994 onward. He synthesizes a profusion of unresolved issues, including Palestinian state borders, Israeli settlements, and the future of the Palestinian war refugees of 1948, and he disproves a number of claims made by the Israeli and Palestinian actors involved in the process. He also illuminates such questions as whether the talks commenced too early for one or both sides, whether the push for a final settlement was the caprice of three or four senior decision-makers disconnected from their constituencies, and whether the cycle of violence has turned back the clock.

Based on Klein's personal experience in official and informal talks between the two sides, this absorbing book offers a rare perspective and level of detail on international negotiation. It will become a prerequisite for all future theoretical discussion of issues at the heart of the Middle East conflict.

Menachem Klein, senior lecturer in political science at Bar-Ilan University in Israel, is the author or editor of four books, including Jerusalem: The Contested City and Doves in the Jerusalem Sky: The Peace Process and the City, 1977-1999. He served as an adviser to the Israeli team during the Camp David talks and is a member of several Israeli-Palestinian track-two diplomacy groups.

Menachem Klein is Senior Lecturer in Political Science at Bar-Ilan University in Israel.