Items related to A MIRACLE, A UNIVERSE: Settling Accounts with Torturers. 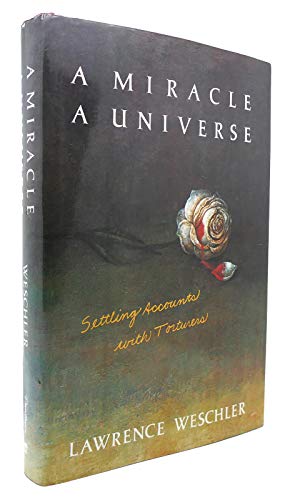 A MIRACLE, A UNIVERSE: Settling Accounts with Torturers.

During the past fifteen years, one of the most vexing issues facing fledgling transitional democracies around the worldâ€”from South Africa to Eastern Europe, from Cambodia to Bosniaâ€”has been what to do about the still-toxic security apparatuses left over from the previous regime. In this now-classic and profoundly influential study, the New Yorker's Lawrence Weschler probes these dilemmas across two gripping narratives (set in Brazil and Uruguay, among the first places to face such concerns), true-life thrillers in which torture victims, faced with the paralysis of the new regime, themselves band together to settle accounts with their former tormentors.

"When individuals are being tortured and everyone knows about it and no one seems able to do a thing to help," Lawrence Weschler writes, "primordial mysteries at the root of human community come under assault as well." Overthrowing oppressive regimes is not enough to resolve the crisis; the persecutors must also acknowledge what they have done. "True forgiveness is achieved in community.... It is history working itself out as grace, but it can only be accomplished in truth."

A Miracle, A Universe brings together two long nonfiction pieces, originally published in the New Yorker, which examine how citizens of Brazil and Uruguay have worked to "settle accounts" with their former torturers. Weschler uses historical background to supplement his powerful eyewitness reportage and interviews, bearing witness to those who seek to break through official denials of government atrocity. The efforts to build a democratic society in which people can have faith have rarely been portrayed with as much immediacy and insight as Weschler brings to these articles.