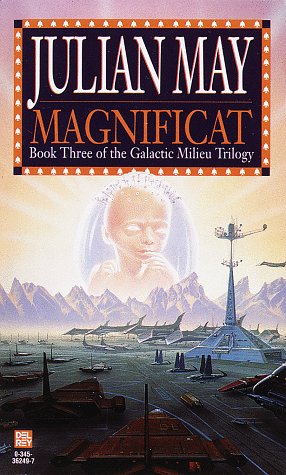 Synopsis: "FASCINATING . . . May has cemented her position as one of this generation's foremost storytellers. . . .This satisfying end to a remarkable feat of the imagination is a necessary purchase."
--Library Journal

By the mid-twenty-first century, humanity is beginning to enjoy membership in the Galactic Milieu. Human colonies are thriving on numerous planets, life on Earth is peaceful and prosperous, and as more humans are being born with metapsychic abilities, it will not be long before these gifted minds at last achieve total Unity.

But xenophobia is deeply rooted in the human soul. A growing corps of rebels plots to keep the people of Earth forever separate, led by a man obsessed with human superiority: Marc Remillard. Marc's goal is nothing less than the elevation of human metapsychics above all others, by way of artificial enhancement of mental faculties. His methods are unpalatable, his goal horrific. And so Marc and his coconspirators continue their work in secret.

Only the very Unity he fears and abhors can foil Marc's plans. And only his brother, Jack the Bodiless, and the young woman called Diamond Mask can hope to lead the metaconcert to destroy Marc, Unify humanity, and pave the way for the Golden Age of the Galactic Milieu to begin . . .

From the Publisher: I read Julian May's Pliocene Exile books long ago, and though I loved them, I confess I was a bit baffled by all the references to the rebellion, and to characters like Diamond Mask and Jack the Bodiless. So getting to edit (and read--at last!) the three books of the Galactic Milieu, which finally explain all those mysterious and tantalizing hints, was a real blast. They really do bring everything full circle, and I am more amazed than ever at a mind that could pull off such a thoroughly complex and rich cycle of stories. Just don't ask me to summarize them!
--Shelly Shapiro, Executive Editor

Book Description Random House Publishing Group. Mass Market Paperback. Condition: Very Good. A copy that has been read, but remains in excellent condition. Pages are intact and are not marred by notes or highlighting, but may contain a neat previous owner name. The spine remains undamaged. At ThriftBooks, our motto is: Read More, Spend Less. Seller Inventory # G0345362497I4N00

Book Description Del Rey, 1997. Condition: Good. First Printing. Shows some signs of wear, and may have some markings on the inside. Seller Inventory # GRP2569601

Book Description Del Rey, 1997. Condition: Good. First Printing. Ships from the UK. Shows some signs of wear, and may have some markings on the inside. Seller Inventory # GRP111531239

Book Description Del Rey, 1997. Condition: Good. A+ Customer service! Satisfaction Guaranteed! Book is in Used-Good condition. Pages and cover are clean and intact. Used items may not include supplementary materials such as CDs or access codes. May show signs of minor shelf wear and contain limited notes and highlighting. Seller Inventory # 0345362497-2-4