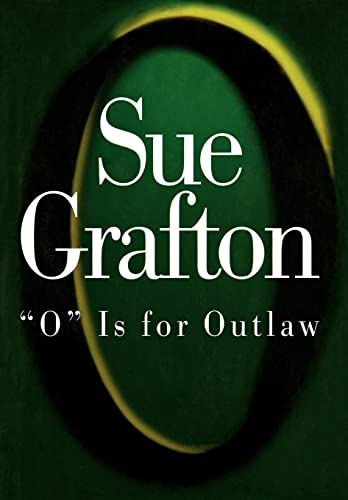 “Grafton keeps pulling out surprises- and pulling us in.” ―Entertainment Weekly on "O" is for Outlaw

Through fourteen books, fans have been fed short rations when it comes to Kinsey Millhone's past: a morsel here, a dollop there. We know of the aunt who raised her, the second husband who left her, the long-lost family up the California coast. But husband number one remained a blip on the screen until now.

The call comes on a Monday morning from a guy who scavenges defaulted storage units at auction. Last week he bought a stack. They had stuff in them--Kinsey stuff. For thirty bucks, he'll sell her the lot. Kinsey's never been one for personal possessions, but curiosity wins out and she hands over a twenty (she may be curious but she loves a bargain). What she finds amid childhood memorabilia is an old undelivered letter.

It will force her to reexamine her beliefs about the breakup of that first marriage, about the honor of that first husband, about an old unsolved murder. It will put her life in the gravest peril."O" Is for Outlaw: Kinsey's fifteenth adventure into the dark side of human nature.

Wise-cracking, staunchly independent, and chronically curious, Grafton's gritty gumshoe Kinsey Millhone is back. This time, the alphabet series star will take on the toughest case to date: her past. What begins as a random phone call from a "storage space scavenger" (someone who buys the contents of defaulted storage units) leads Kinsey to a box of old papers and personal effects that her ex-husband, Mickey Magruder, left behind. Inside, she finds a 15-year-old unsent letter from a bartender that, among other things, reveals her former hubby was having an affair. The letter also contains details about the murder of a transient--a crime for which Mickey was blamed. Although never convicted, Mickey was ruined--losing his job, wife, and friends. But 15 years later, Kinsey realizes that foul play may have been involved in the murder, a deadly temptation for her.

Die-hard fans will especially enjoy Kinsey's self-disclosure--something she's infamous for not doing--about her childhood, the fate of her parents, and the randy details of her first marriage. A very vulnerable and interesting side to Kinsey's character is also revealed when her obsessive-compulsive fact-finding bent is mixed up with matters of the heart.

A fast, fun read, O Is for Outlaw is packed with Grafton's clear, colorful imagery and signature metaphors: "Our recollection of the past is not simply distorted by our faulty perception of events remembered, but skewed by those forgotten. The memory is like orbiting twin stars, one visible, one dark, the trajectory of what's evident forever affected by the gravity of what's concealed." --Rebekah Warren