Home Joelle Proust Questions of Form: Logic and the Analytic Proposition from Kant ... 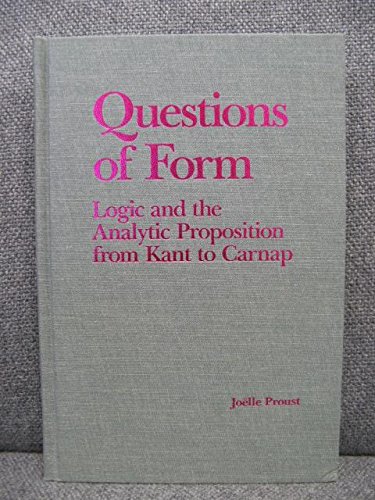 Questions of Form: Logic and the Analytic Proposition from Kant to Carnap

Questions of Form was first published in 1989. Minnesota Archive Editions uses digital technology to make long-unavailable books once again accessible, and are published unaltered from the original University of Minnesota Press editions.

In Questions on Form, Joelle Proust traces the concept of the analytic proposition from Kant's development of the notion down to its place in the work of Rudolf Carnap, a founder of logical empiricism and a key figure in contemporary analytic philosophy. Using a method known in France as topique comparative,she provides a rigorous exposition of analyticity, situating it within four major philosophical systems—those of Kant, Bolzano, Frege, and Carnap—and clearly delineating its development from one system to the next.

Proust takes as her point of departure Kant's distinction between analytic and synthetic judgments. Though she makes clear that Kant drew on Locke, Hume, and Leibniz, she argues that his notion of analyticity was innovative, not simply an elaboration of something already found in their work. She shows that the analytic proposition unexpectedly (given its modest status in Kant) came to play an important part in efforts to convert problems considered "transcendental" into questions of belonging to formal logic.

Ultimately, her comparison of their systems reveals that the concept of the analytic, however specific its rile in each, remains linked to a foundationalist strategy—in effect, to the transcendentalist questions Kant used when he reinterpreted the findings of his empiricist predecessors. Hence, this book's provocative claim: today's so-called logical empiricism owes much more to Kant's notion of science than to Hume's.

From the Back Cover: Minnesota Archive Editions uses digital technology to make long-unavailable books once again accessible to scholars, students, researchers, and general readers. Rich with historical and cultural value, these works are published unaltered from the original University of Minnesota Press editions. The books offered through Minnesota Archive Editions are produced in limited quantities according to customer demand and are available through select distribution partners.

1. Questions of Form: Logic and the Analytic Proposition from Kant to Carnap

2. Questions of Form: Logic and the Analytic Proposition from Kant to Carnap

3. Questions of Form: Logic and the Analytic Proposition from Kant to Carnap

Book Description Univ of Minnesota Pr, 1989. Condition: Good. A+ Customer service! Satisfaction Guaranteed! Book is in Used-Good condition. Pages and cover are clean and intact. Used items may not include supplementary materials such as CDs or access codes. May show signs of minor shelf wear and contain limited notes and highlighting. Seller Inventory # 0816617600-2-4

4. Questions of Form: Logic and the Analytic Proposition from Kant to Carnap. Translated by Anastasios Albert Brenner.