Items related to The Simon and Kirby Superheroes 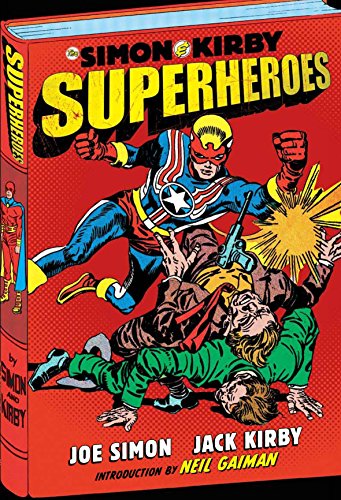 The Simon and Kirby Superheroes

Title: The Simon and Kirby Superheroes

Beginning with Blue Bolt in June 1940, Joe Simon and Jack Kirby set the standard for costumed heroes. Their creation Captain America remains one of the most famous heroes in comic book history, and their work for Timely and DC Comics raised the bar.

This large format hardcover collects the duo’s most exciting characters: Fighting American, their cold-war take on the patriotic hero, The Fly, with origins in an unknown Spider-Man prototype, Lancelot Strong, the man with the double life, and the Hollywood swashbuckler known as Stuntman.

This is the only edition authorized by both Joe Simon and the estate of Jack Kirby, gathered from the official Simon and Kirby archives.

Joe Simon and Jack Kirby created one of the most enduring American heroes in 1940 with the first issue of Captain America Comics from Timely Comics--the company that became Marvel Comics. Simon proved to be a brilliant editor, writer, penciller, inker, and businessman, serving as an editor for Archie, Harvey, Fox, Crestwood, and Mainline Publications--Simon and Kirby's own company.

Jack Kirby is one of the most famous illustrators in comic book history. Having begun in the Fox Comics Bullpen in 1939, he teamed with Joe Simon on such seminal series as Blue Bolt and Captain Marvel Adventures. In subsequent years they worked in every genre imaginable, often seeing their titles sell in excess of one million copies.

Jim Simon is an author of novels and nonfiction books, including histories of comics and pulp art. His contributions to his book lend insight into the Simon and Kirby creative process and personal interactions as well as providing a look at the history of comics during the team's run. Jim's graphic novel, ShieldMaster: The Phoenix Project, is available on Amazon in digital (ASIN: B013YPY93Q) and print (ASIN: 096268581X) format.