It's easy to understand why people are interested in vintage airline posters that were designed to last for just a few months. The imagery, the colors, and the messaging that air travel was glamorous and accessible to all still catches the eye today.

Airline posters are not like books. They were produced in small numbers in a single print run to be displayed in airports and travel agents, and scarcity is a major factor. They are ephemeral and most were tossed away when a new poster was delivered. They were also attached to the wall and that makes condition an important factor.

Perhaps the best place to start is to understand the airlines. We are talking about companies that were early pioneers of international air travel and who expanded rapidly between the 1940s and 1960s. Some of these airlines are no more, now absorbed into larger companies. Some are still going strong and familiar to anyone who has starred at a departure board.

The most popular way to collect is by airline. Air France, TWA, Pan Am, Continental, BOAC, BEA, AOA, Sabena, Quantas, United, American, Lufthansa, Swissair, and SAS are just the tip of the runway. You could also collect by era, destination, artist, or style. There are lots of routes to go. It can be fun to focus on obscure airlines (Imperial Airways anyone?), but it's easy to see the appeal of Pan Am's posters from the 1960s when it had the world at its check-in desk. 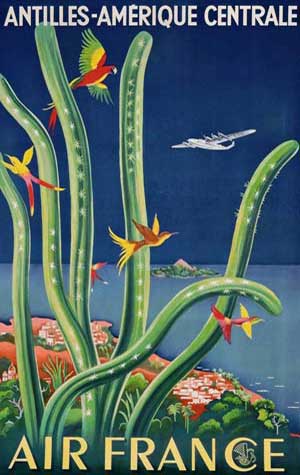 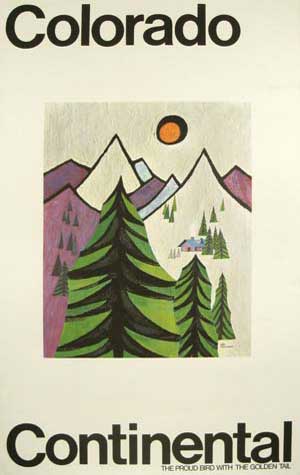 Air France is an interesting airline. The French have been in the poster business since the days of the Revolution and were among the first to seize upon the power of the poster in commercial advertising. Air France was founded in 1933 when several airlines merged and it has a fine reputation for employing talented illustrators. In the early 1970s, it used abstract designs that completely went against where commercial art was heading.

Start by reading a book. We recommend Art of the Airways by Geza Szurovy, Poster Art of the Airlines by Donald W Thomas and Fly Now!: The Poster Collection of the Smithsonian National Air and Space Museum. There are also numerous books compiling travel posters in general that also cover airlines.

Condition grading is similar to rare books although you may see words like 'mint' and 'average' used by dealers. You need to look for folds, tears, pin holes, and any number of effects caused by age from fading to dirt, and see if restoration work has been done. As with books, set your budget and stick to it. You can spend anywhere from $100 to $5,000 on a poster depending demand and its scarcity.

In terms of collecting by artist, you need to do your homework. Illustrators are not always declared on a poster. One of the major names in airline poster art was David Klein, who worked for TWA in the 1950s and 1960s. Klein's vibrant colors and style are easily recognizable today. Bernard Villemot designed numerous stunning posters for Air France, and Donald Brun's Swissair posters are always in demand.

One caveat - racial stereotypes do crop up, particularly for Southeast Asian destinations. Times were different in the 1950s and posters often have to summarize an entire country, or even a region, in a single illustration.

What poster on this page is your favorite?