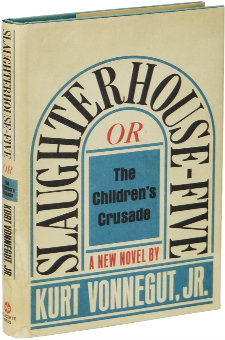 "Hello, babies. Welcome to Earth. It's hot in the summer and cold in the winter., It's round and wet and crowded. At the outside, babies, you've got a hundred years here. There's only one rule that I know of, babies - God damn it, you've got to be kind." - from God Bless You Mr. Rosewater or Pearls Before Swine.

That quote by Kurt Vonnegut (of course) hangs in my son's nursery. My husband and I bought the Kurt Vonnegut poster (by artist Tim Doyle, titled "Got to Be Kind"), when I was pregnant. In fact, it was the first purchase we made specifically for the baby upon finding out we were expecting. Anyone who knows Kurt Vonnegut at all knows the man had a way with words, and that's just one of many Kurt Vonnegut quotes that sums it all up nicely. Welcome to Earth - you've got to be kind. Perfect.

Vonnegut (1922-2007) was one of the best loved American authors of his generation, even having an asteroid named after him. The author's most celebrated novels are Slaughterhouse-Five, Cat's Cradle, and Breakfast of Champions. His work stretched across black comedy, science fiction and satire.

Prior to his writing career, Vonnegut - famous for his broad moustache and mop of curly hair - fought in World War II. Captured by the Germans, he was a prisoner of war and held in an underground meat locker being used as a makeshift prison. The Germans called the building Schlachthof Fünf (Slaughterhouse Five) and Vonnegut's experiences, including seeing the devastating bombing of Dresden, became the basis for several books. And there were many. Another famous Kurt Vonnegut quotation addressed his feelings on writing: "Who is more to be pitied, a writer bound and gagged by policemen or one living in perfect freedom who has nothing more to say?" With 14 novels, seven plays and nine collections of short stories published between 1952 and 1997, assorted poems, addresses, introductions, speeches and other smatterings, as well as another seven short story collections published posthumously, it seems running out of things to say was not a predicament suffered by Vonnegut.

The fictional character, Kilgore Trout, was one of Vonnegut's literary trademarks. Often considered somewhat of an alter ego for Vonnegut, Trout is an unappreciated science fiction author who plays different roles in several of Vonnegut's novels, from acting as a catalyst for the major characters in Breakfast of Champions, God Bless You, Mr. Rosewater and Slaughterhouse-Five to being one of the main figures in Jailbird and Timequake. Other famous and beloved Vonnegut characters include Harrison Bergeron, Billy Pilgrim and more.

When collecting Kurt Vonnegut books, it would be easy to spend a mint - a signed first edition of any Vonnegut classic will cost several hundred to several thousand pounds. However copies of later editions and lesser known books signed by Kurt Vonnegut can be found much more affordably.

Watch out for interesting limited editions such as Missing in Action (limited to 126 copies) which is a reprint of a May 29, 1945 letter written after his harrowing experience as a P.O.W. or the first UK edition of Player Piano (Vonnegut's first novel). Only 3,000 copies of Player Piano were printed in the UK and it is thought many were pulped.

The Sirens of Titan

Collectible copies of The Sirens of Titan

God Bless You, Mr. Rosewater; or Pearls Before Swine

Collectible copies of Breakfast of Champions

Collectible copies of Gal�pagos: A Novel

Canary in a Cathouse - Short Stories

Collectible copies of Canary in a Cathouse - Short Stories

Collectible copies of Welcome to the Monkey House - Short Stories

Nothing Is Lost Save Honor - Essays

Collectible copies of Nothing Is Lost Save Honor - Essays

Collectible copies of Fates Worse than Death: a Autobiographical Collage

A Man Without a Country - Essays

Collectible copies of A Man Without a Country - Essays