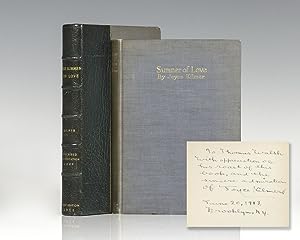 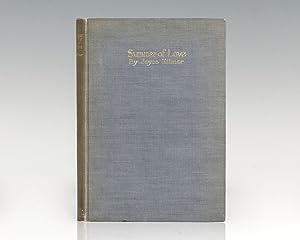 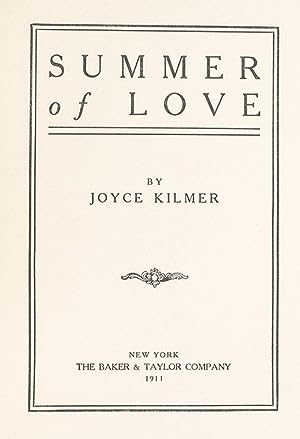 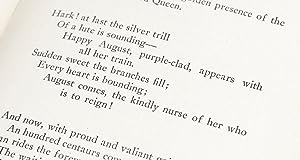 First edition, first issue of Joyce Kilmer's first book of verse. Presentation copy, inscribed by the author on the front free endpaper to fellow poet and literary critic Thomas Walsh,Â"To Thomas Walsh, With appreciation of his roast of this book, and the sincere admiration of Joyce Kilmer, June 20, 1913, Brooklyn, NY." AÂscholar of Latin American and Spanish literature, Thomas Walsh published four books of poetry andÂwrote many short articles and reviews, including several for theÂNew York Times.ÂWith Walsh's bookplate to the pastedown. Octavo, original cloth. In near fine condition. Housed in a custom half morocco and chemise box. A nice association and uncommon signed as Kilmer was killed in World War I. American poet Joyce Kilmer would later write of his first book of verse, Summer of Love, that ".some of the poems in it, those inspired by genuine love, are not things of which to be ashamed, and you, understanding, would not be offended by the others." Kilmer gained immense popularity in 1913 with the publication of his best known poem, Trees, which was later published in book format the following year in a collection which also introduced the popular poem "The House With Nobody In It". Seller Inventory # 92792

Raptis Rare Books is an antiquarian book firm that specializes in fine first editions, signed and inscribed books, and landmark books in all fields. We have distinguished ourselves by having a reputation for handling unique and important books that are in exceptional condition. Our business model is simple: we strive to handle books that are in exceptional condition and to provide exceptional customer service. We specialize in working with private collectors with a specific wish list, helping individuals find the ideal gift for special occasions, and partnering with representatives of institutions. We are here to assist you in your pursuit and to be your guide in bringing the library of your imagination to reality. Please visit our rare book gallery located at 329 Worth Avenue in Palm Beach, Florida, visit our website www.raptisrarebooks.com, call us at 561.508.3479, or email us at mail@raptisrarebooks.com. Free gift wrapping available upon request.


All books are first editions, first printings unless otherwise noted. If you have any questions, feel free to contact us. All items are guaranteed. Domestic shipping is free. www.raptisrarebooks.com