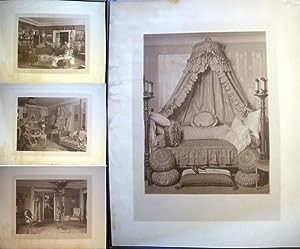 A collection of 11 images by this photographic studio; approx. 14" x 11" overall with generous margins, the image sizes approx. 9" x 7", all done in sepia tones and in matte finish; every image with the Marceau 258 Fifth Avenue N.Y. studio blindstamp in lower right margin and a smaller armorial blindstamp at top left corner; the images show elaborately furnished interiors with heavily decorated furniture having detailed needlework upholstery, heavy curtains & patterned wallpaper, period wall sconces, lampshades and lamps with exuberant frill-work and encrustations of fruit and porcelain whimsy; decorative accessories include enormous standing lamps styled a la Japonisme, tea sets, statuary, bookcases, vases, glassware of all types, lace doilies, pillows, a couch or day-bed that is covered with an elaborate A-shaped canopy heavily frilled and ruffled, with pillows and a pair of lampstands to match - a pair of decorated bedroom slippers await; we speculate that these photographs may not be from a lived-in home but rather depicting the salesrooms of an interior designer of the time that had commissioned the photography to show their furniture and design wares - nothing looks lived-in - these rooms and their furnishings are on display; Colonel Theodore C. Marceau (1860-1922) served as a U. S. government photographer, stationed in Santiago, Chile, on the 1882 expedition recording the transit of Venus from South America, served on the staff of Governor Foraker of Ohio, then Governor Markham of California before leaving public service and setting up a studio in California. Marceau established himself as a photographer in Los Angeles, California, before moving to New York City and opening his Fifth Avenue gallery on December 29, 1900. In 1905 he and Pirie McDonald organized the Professional Photographers Society of New York State and served as its First Vice-President. With B. J. Falk and Pirie MacDonald, Marceau organized the Copyright League that lobbied Congress for stronger rights protections for photographers against the appropriation of their images by newspapers. It is he that recommended that a c with a circle around it and the photographer's name on the front of an image serve as the public claim that an image was copyright protected. Marceau was an acquisitive genius who took the proceeds from his studio at 285 Fifth Avenue and sunk them into real estate and collecting. Operating on the 19th-century corporation model, Marceau had branches of his studio in Cincinnati, Indianapolis, San Francisco, and Boston. He owned substantial chunks of Manhattan real estate, a fleet of automobiles, and 'one of the finest collections of bric-a-brac in this country.' He was listed in the New York "Blue Book." At his death, he was worth millions. His ability as a photographer was recognized by le Ministere de I'Instruction publique of France which named him Officer d'Academie. Col. Marceau ran a diversified photographic studio that did portraiture, scientific photography, and occasional photojournalism. Upon Marceau's marriage to actress Jeanne Allen in 1891, he became greatly interested in theatrical portraiture. Made extensive use of props, drapes, and painted backdrops in his portraits. (As very evident in this collection) Well connected to the political establishment, Marceau also specialized in official portraiture, travel images, and advertising photography. His various branches were run as local service photography shops, doing home photography, Society shots, and official function images. (this information from Dr. David S. Shields, 'Broadway Photographs'); one image with some discoloration at bottom of image and side, which goes into the image field; others with some in the margin only; the photography is very well done, clear and in overall good to very good condition and an interesting collection in early 20th century interior design, architecture and also in the history of commercial photography in America and the effort to copyri. Bookseller Inventory # 20916

We are active buyers, sellers and appraisers of antiquarian, scholarly, literary and historical materials including books, documents, photographs, manuscripts and collections and archives of varied interest. We are members in good standing of the Antiquarian Booksellers Association of America (ABAA), the International League of Antiquarian Booksellers (ILAB), the Ephemera Society of America, the Bibliographical Society and Manuscript Society. We are happy to correspond via email or phone.


Types of payment welcomed: Please use the abebooks.com credit card system or use PayPal for all credit cards. We will also accept your check or money order, as long as it is drawn on U.S. funds in a U.S. bank; for wire transfers please confer with us first. New York State residents please add appropriate sales tax. If item is not as described, return within 10 days for refund. Thank You! George Krzyminski, at Certain Books.


U.S. Domestic Shipping is $6 first book, $1 each book thereafter. International orders figured individually. Shipping costs are based on books weighing 2.2 LB, or 1 KG. If your book order is heavy or oversized, we may contact you to let you know extra shipping is required.