Items related to In the Beginning: New Interpretation of Genesis

Armstrong, Karen In the Beginning: New Interpretation of Genesis 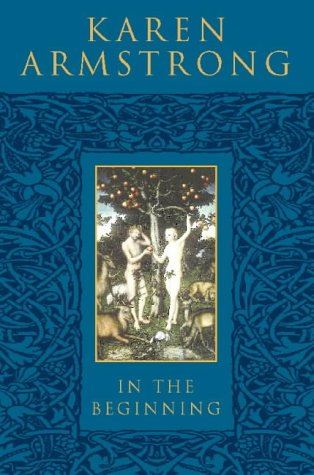 In this fascinating book by the author of A History of God and Jerusalem, one of the best-known and least-understood books of the Bible is clarified for modern readers. Armstrong shows readers how the ancient tales of the Creation, the Fall, Cain and Abel, Noah, Abraham, Jacob, and Joseph illuminate our most profound and impenetrable problems.

About the Author:
Karen Armstrong is one of the world's leading commentators on religious affairs. She spent seven years as a Roman Catholic nun in the 1960s, but then left her teaching order in 1969 to read English at St Anne's College, Oxford. In 1982, she became a full time writer and broadcaster. She is a best-selling author of over 15 books. An accomplished writer and passionate campaigner for religious liberty, Armstrong has addressed members of the United States Congress and the Senate and has participated in the World Economic Forum.
Review:
"Both humble and generous, Karen Armstrong rescues Genesis from purely literary criticism by seeing it as a collection of rather baffling teaching stories, and argues forcefully that we have to struggle for the meanings embedded in the often mysterious text, much as Jacob wrestled all night with God in the shape of an angel." * Independent * "Superb...a jewel of a study... The entire book is written with the same level of passion and insight...Ms Armstrong has taken a familiar biblical story and made it relevant to our deepest and darkest concerns...a little masterpiece worthy of being a long-treasured companion to the ancient classic she celebrates" * Washington Post * "Armstrong reveals much about this ostensibly familiar work" -- Christopher Hirst * Independent * "Armstrong wants to restore the philosophical to the question of faith, and she does so in an approachable manner" -- Lesley McDowell * Herald *

Book Description Paperback. Condition: Very Good. In the Beginning: New Interpretation of Genesis This book is in very good condition and will be shipped within 24 hours of ordering. The cover may have some limited signs of wear but the pages are clean, intact and the spine remains undamaged. This book has clearly been well maintained and looked after thus far. Money back guarantee if you are not satisfied. See all our books here, order more than 1 book and get discounted shipping. . Seller Inventory # 7719-9780006280149

Shipping: US$ 5.41
From United Kingdom to U.S.A.
Destination, rates & speeds

Book Description Paperback. Condition: Very Good. Shipped within 24 hours from our UK warehouse. Clean, undamaged book with no damage to pages and minimal wear to the cover. Spine still tight, in very good condition. Remember if you are not happy, you are covered by our 100% money back guarantee. Seller Inventory # 6545-9780006280149

Shipping: US$ 8.41
From United Kingdom to U.S.A.
Destination, rates & speeds

In the Beginning: A New Reading the Book of Genesis

Book Description Condition: Good. This is an ex-library book and may have the usual library/used-book markings inside.This book has hardback covers. Clean from markings. In good all round condition. Dust jacket in good condition. Please note the Image in this listing is a stock photo and may not match the covers of the actual item,400grams, ISBN:9780006280149. Seller Inventory # 9805521

Shipping: US$ 14.37
From United Kingdom to U.S.A.
Destination, rates & speeds

Book Description Paperback. Condition: Very Good. Dust Jacket Condition: Very good. First Edition. A clean, tight copy throughout with minimal wear. Pages very slightly tanned along edges; texts remains bright. No markings. Unclipped dust jacket shows a little wear along top edge at the back. ALL ITEMS ARE DISPATCHED FROM THE UK WITHIN 24 HOURS ( BOOKS ORDERED OVER THE WEEKEND DISPATCHED ON MONDAY) ALL OVERSEAS ORDERS SENT BY AIR MAIL. WE ALSO ACCEPT PAYMENT IN US DOLLARS OR EURO BY BANK TRANSFER. IF YOU ARE LOCATED OUTSIDE THE UK PLEASE ASK US FOR A POSTAGE QUOTE FOR MULTI VOLUME SETS BEFORE ORDERING. Seller Inventory # mon0000637555

Shipping: US$ 18.07
From United Kingdom to U.S.A.
Destination, rates & speeds

Shipping: US$ 15.06
From United Kingdom to U.S.A.
Destination, rates & speeds

In the beginning: a new reading of the Book of Genesis

Shipping: US$ 15.60
From United Kingdom to U.S.A.
Destination, rates & speeds