Items related to Slowly Down the Ganges

Newby, Eric Slowly Down the Ganges

Slowly Down the Ganges 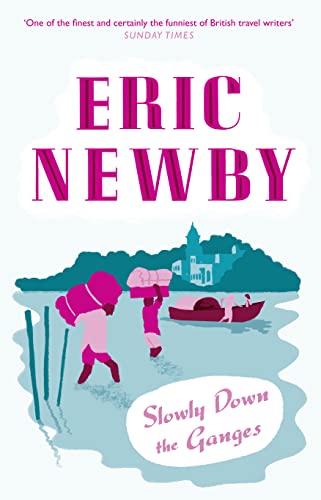 On his 44th birthday, Eric Newby sets out on an incredible journey: to travel the 1,200-mile length of India's holy river. In a misguided attempt to keep him out of trouble, Wanda, his wife, is to be his fellow boatwoman. This book documents their experience.

Eric Newby has never been bedeviled by practicality. Hence this 1,200-mile journey down the Ganges River, which the author undertook in 1963 in the company of his wife and an ever-changing crew of Indian retainers. What moved him to take the trip? Partly it was the memory of his military service in India more than two decades before. And as he confesses, Newby has a lifelong and perhaps congenital love of rivers: "I like exploring them. I like the way in which they grow deeper and wider and dirtier but always, however dirty they become, managing to retain some of the beauty with which they were born." Few rivers grow quite as dirty as the Ganges, which also goes by such nicknames as Atula ("Peerless"), Savitri ("Stimulator"), and Bhinna-brahmanda-darpini ("Taking pride in the broken egg of Brahma"). And few accounts of this mighty waterway could possibly be as acute and hilarious as Slowly down the Ganges, which Newby first published in 1966.

As always, the author finds human comedy everywhere he looks. Take his initial departure from beneath the Balawali Bridge, where a highly emotional crowd has gathered to see him off:

Two hundred yards below the bridge and some twelve hundred miles from the Bay of Bengal the boat grounded in sixteen inches of water.... I looked upstream to the bridge but all those who had been waving and weeping had studiously turned their backs. The boatmen uttered despairing cries for assistance but the men at the bridge bent to their tasks with unwonted diligence. As far as they were concerned we had passed out of their lives. We might never have existed.

And so it goes, even as Newby and his crew run aground 63 times in the first six days, or switch doggedly from boat to train to bullock cart and back to boat again. His patience in the face of continuous disaster is superbly entertaining, as are his attempts to mollify his increasingly impatient wife, Wanda. Still, his gift for the farcical slow burn never keeps him from relishing the terrain, or from recording it in lyrical yet laconic prose: "At about six the sky to the east became faintly red; then it began to flame and the moon was extinguished; clouds of unidentifiable birds flew high overhead; a jackal skulked along the far shore and, knowing itself watched, went up the bank and into the trees; mist rose from the wet grass on the islands on which the shisham trees stood, wrapped like precious objects in their bandages of dead grass." Slowly down the Ganges is packed with such time-lapse portraiture, along with plenty of casual wisdom about history, humanity, and (last but not least) conjugal life. It's one of those rare voyages we only wish were much, much slower. --James Marcus About the Author:

1. Slowly Down the Ganges

2. Slowly Down the Ganges

3. Slowly Down the Ganges

4. Slowly Down the Ganges

5. Slowly Down the Ganges

6. Slowly Down the Ganges

7. Slowly Down the Ganges

8. Slowly Down the Ganges