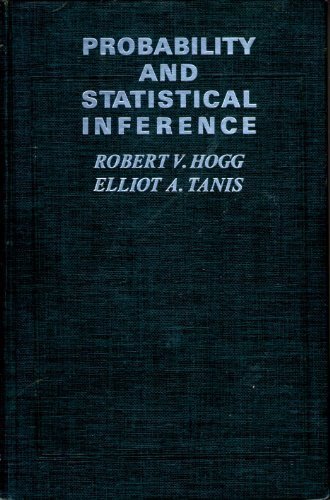 This user-friendly introduction to the mathematics of probability and statistics (for readers with a background in calculus) uses numerous applications--drawn from biology, education, economics, engineering, environmental studies, exercise science, health science, manufacturing, opinion polls, psychology, sociology, and sports--to help explain and motivate the concepts. A review of selected mathematical techniques is included, and an accompanying CD-ROM contains many of the figures (many animated), and the data included in the examples and exercises (stored in both Minitab compatible format and ASCII). Empirical and Probability Distributions. Probability. Discrete Distributions. Continuous Distributions. Multivariable Distributions. Sampling Distribution Theory. Importance of Understanding Variability. Estimation. Tests of Statistical Hypotheses. Theory of Statistical Inference. Quality Improvement Through Statistical Methods. For anyone interested in the Mathematics of Probability and Statistics.

An accessible introduction to the mathematics of probability and statistics for students with a background in calculus. Numerous applications help explain and motivate the concepts.

We are pleased with the reception that was given to the first five editions of Probability and Statistical Inference. The sixth edition is still designed for use in a course having from three to six semester hours of credit. No previous study of statistics is assumed, and a standard course in calculus provides an adequate mathematical background. Certain sections have been starred and are not needed in subsequent sections. This, however, does not mean that these starred sections are unimportant, and we hope many of you will study them.

We still view this book as the basis of a junior or senior level course in the mathematics of probability and statistics that is taught by many departments of mathematics and/or statistics. We have tried to make it more "user friendly"; yet we do want to reinforce certain basic concepts of mathematics, particularly calculus. To help the student with methods of algebra of sets and calculus, we include a Review of Selected Mathematical Techniques in Appendix A. This review includes a method that makes integration by parts easier. Also we derive the important Rule of 72 that provides an approximation to the number of years necessary for money to double. MAJOR CHANGES IN THIS EDITION

Chapter 1 still provides an excellent introduction to good descriptive statistics and exploratory data analysis and the corresponding empirical distributions. However, probability models are also introduced in Chapter 1 so that the student recognizes from the beginning that the characteristics of the empirical distributions are estimates of those of probability distributions. Hopefully, this creates some interest among students in checking to see if a probability model is appropriate for the situation under consideration throughout the text.

By request of many statisticians, we have introduced multivariate distributions much earlier, but in such a way that only the first section of that chapter is needed for the chapters that follow on techniques used in statistical inference. Hence, if an instructor so desires, he or she can start statistical methods sooner without conditional distributions.

While this book is written primarily as a mathematical introduction to probability and statistics, there are a great many examples and exercises concerned with applications. For illustrations, the reader will find applications in the areas of biology, education, economics, engineering, environmental studies, exercise science, health science, manufacturing, opinion polls, psychology, sociology, and sports. That is, there are many exercises in the text, some illustrating the mathematics of probability and statistics but a great number are concerned with applications. We are certainly more concerned with model checking in this edition than in the previous editions.

The chapter on confidence intervals is so organized that the instructor can introduce early basic concepts of regression and distribution-free techniques, if he or she chooses to do so. That is, the separate chapter on nonparametric methods has been dropped, and those basic concepts are included among the other methods of statistical inference. After the considerations of the first few basic sections in the chapters on estimation and tests, the instructor may select among some of the later sections in each of those chapters. It is also noted that, at the suggestion of two of the reviewers, Section 8.11 on resampling methods is new to this edition, and we hope some instructors will choose to consider this new technique of statistical inference.

While the text is written primarily for a two-semester sequence of a probability course (selections from Chapters 1-6) followed by a statistical inference course (selections from Chapters 7-10), it can be used for a 4-credit hour semester course for those students with a good calculus background. In such a course, Chapters 1-4 (except the starred sections) are considered followed by Section 5.1 and most of Chapter 6; these make up about 70 percent of the course. The remaining 30 percent consists of selections from Chapters 7 and 8, unless the instructor wants to consider some of the theory given in the early part of Chapter 9. Those interested in the statistical methods used in quality improvement would want to consider at least part of Chapter 10.

Different from most textbooks, we have included a prologue, a centerpiece, and an epilogue. The main emphasis in these is that variation occurs in almost every process, and the study of probability and statistics helps us understand this variability. Accordingly, the study of statistics is extremely useful in many fields of endeavor and can lead students to interesting positions in the future. FEATURES

Throughout the book, figures and real applications will help the student understand statistics and what statistical methods can accomplish. For some exercises, it is assumed that calculators or computers are available; thus the solutions will not always involve "nice" numbers. Solutions using a computer are given if a complicated data set is involved. The data sets for all of the exercises are available on a data disk and on the Web. ANCILLARIES

A Solutions Manual containing worked-out solutions to the even-numbered exercises in the text is available to instructors from the publisher. Many of the numerical exercises were solved using Maple. For additional exercises that involve simulations, a separate manual Probability & Statistics: Explorations with MAPLE, second edition, by Zaven Karian and Elliot Tanis is available for purchase. Several exercises in that manual also make use of the power of Maple as a computer algebra system.

A CD-ROM is new for this edition. There are two folders on the CD. The folder titled "Data" includes the data files for most of the exercises and examples in the text. Each chapter for which data files are given has it's own folder and most include separate folders for pertinent sections. The files are saved in a number of different formats to provide maximum flexibility to the user. The folder labeled figures contains two types of figures. Several of the figures in the text are stored as Minitab projects (.mpj) within chapter folders. They can be opened from Minitab or it may be possible to double click on one of these files and Minitab will open the selected file. The other figures included in this folder were generated using Maple. These include animated versions of several figures in the text that allow the user to view the figures in a dynamic environment that will help clarify and reinforce the concepts being presented. To view the animated figures, as well as others that were generated using Maple, the user must have access to a web browser such as Microsoft Explorer or Netscape Navigator. If you have a web browser, the most efficient approach to viewing the figures is to open the Figures Folder and double click on the directory.htm file. This file should open in your web browser and present you with a list of figures from which to select.