Items related to Rowan and the Travelers

Rodda, Emily Rowan and the Travelers

Rowan and the Travelers 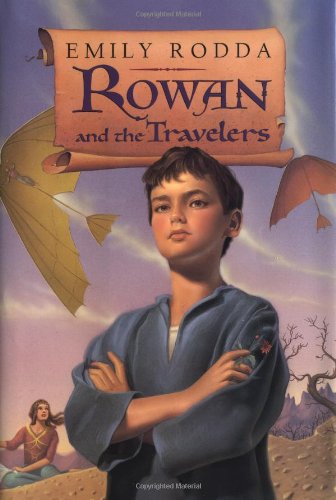 When the village of Rin falls under a sleeping spell, Rowan is one of the few who doesn't fall victim and thus sets out on a dangerous journey to find a cure that will awaken his family and friends once again.

Gr. 3-6. In this sequel to Rowan of Rin [BKL My 1 01], the young bukshah herder once again finds himself at the center of village turmoil. This time the arrival of a nomadic tribe, the Travelers, has caused consternation among Rin's residents. In quick succession, the villagers decide not to discuss their new mountain berry crop; a medicine woman predicts that an enemy has arrived in town; and townsfolk begin dropping into a deep sleep. Only Rowan and half-Traveler Allun are left standing to find the mysterious enemy. Once again Rodda's fantasy world, a folkloric Anytime, becomes a vivid reality for readers, and it's filled with believable characters that deal with problems that seem very contemporary, right down to a thoughtful commentary on tampering with nature: when Rowan journeys through the Pit of Unrin, for example, he discovers that the carnivorous trees that killed life in the valley are actually a mature version of the sweet-smelling plant just introduced in his village. This worthy sequel succeeds on many levels: as adventure, as a tale of the weak triumphing over the mighty, and as an environmental alert. Kay Weisman
Copyright © American Library Association. All rights reserved

1. Rowan and the Travelers Rodda, Emily