Items related to So This is How it Ends (Avatars, Book 1)

Sutherland, Tui T. So This is How it Ends (Avatars, Book 1)

So This is How it Ends (Avatars, Book 1) 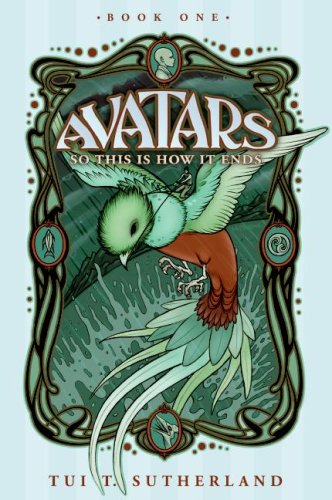 Something was different. She stepped hesitantly out of the subway car, her boots sounding even louder now. What was it?

The graffiti. Had that been there before?

Emblazoned across the far wall in huge silver letters:

The end has come.

In New York, Kali wakes to an empty subway car, and an even emptier city. Venus and Gus survive an earthquake in Los Angeles and realize they have to deal with more than just the aftershocks. In Chile, Tigre finds himself in an unfamiliar jungle, and strangely not alone. And Amon, in Egypt, can see his path but is blind to the full picture.

They are suddenly trapped in a deserted world, five teenagers with no hope of escape. Why have they survived? What force—or intelligence—connects them? Drawn inexorably toward one another, they only know their future involves an experience outside anything they could have imagined. Fantasy newcomer Tui T. Sutherland creates a future in which teens have the power to complete the destruction of Earth—or to save it.

Tui T. Sutherland is named after a rather noisy New Zealand bird. She loves lost civilizations and post-apocalyptic stories, and she has recurring end-of-the-world dreams (perhaps a side effect of being a Buffy fan!). Tui was born in Caracas, Venezuela, and lived all over the world before ending up in Boston, where she now resides with her husband and her dog, whose superpowers include hiding half-chewed things in the couch and woofing at noises no one else can hear. Tui is also the author of the first book in this trilogy, Avatars Book One: So This Is How It Ends, as well as This Must Be Love.

Grade 7-10–This creepy, futuristic title opens on the lives of five teens from various parts of the world. Through alternating narratives, readers learn that they all have strange powers that affect those around them in various ways. Then they suddenly find themselves among the few humans alive–what has felt like a day to them has been 75 years to the rest of the world. Lured to New York City by mysterious voices inside their heads, they discover why they are the only teens left and what it will mean to the world. Dealing with robotic crystal monsters, genetically altered animals, and old people with no hope, these young people must come to terms with what being an avatar means and how their powers will play out. The end of the world takes on a very different twist from series such as Tim LaHaye and Jerry B. Jenkins's Left Behind (Tyndale House) or K. A. Applegate's Animorphs (Scholastic). Readers will be drawn to the well-written characters and intrigued by the unexpected, cliff-hanger ending.–June H. Keuhn, Corning East High School, NY
Copyright © Reed Business Information, a division of Reed Elsevier Inc. All rights reserved.