Items related to One Crazy Summer 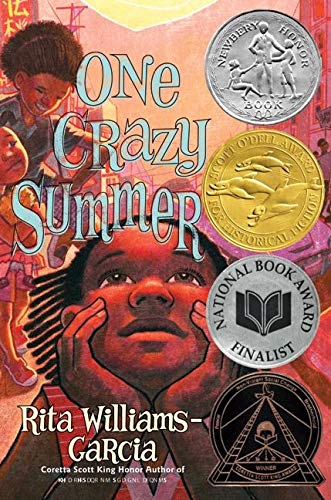 In this Newbery Honor novel, New York Times bestselling author Rita Williams-Garcia tells the story of three sisters who travel to Oakland, California, in 1968 to meet the mother who abandoned them. "This vibrant and moving award-winning novel has heart to spare."*

Eleven-year-old Delphine is like a mother to her two younger sisters, Vonetta and Fern. She's had to be, ever since their mother, Cecile, left them seven years ago for a radical new life in California. But when the sisters arrive from Brooklyn to spend the summer with their mother, Cecile is nothing like they imagined.

While the girls hope to go to Disneyland and meet Tinker Bell, their mother sends them to a day camp run by the Black Panthers. Unexpectedly, Delphine, Vonetta, and Fern learn much about their family, their country, and themselves during one truly crazy summer.

This moving, funny novel won the Scott O'Dell Award for Historical Fiction and the Coretta Scott King Award and was a National Book Award Finalist. Delphine, Vonetta, and Fern's story continues in P.S. Be Eleven and Gone Crazy in Alabama.

Readers who enjoy Christopher Paul Curtis's The Watsons Go to Birmingham and Jacqueline Woodson’s Brown Girl Dreaming will find much to love in One Crazy Summer.

This novel was the first featured title for Marley D’s Reading Party, launched after the success of #1000BlackGirlBooks. Maria Russo, in a New York Times list of "great kids' books with diverse characters," called it "witty and original."

*Brightly, in Olugbemisola Rhuday-Perkovich's article "Knowing Our History to Build a Brighter Future: Books to Help Kids Understand the Fight for Racial Equality"

Eleven-year-old Delphine has it together. Even though her mother, Cecile, abandoned her and her younger sisters, Vonetta and Fern, seven years ago. Even though her father and Big Ma will send them from Brooklyn to Oakland, California, to stay with Cecile for the summer. And even though Delphine will have to take care of her sisters, as usual, and learn the truth about the missing pieces of the past.

When the girls arrive in Oakland in the summer of 1968, Cecile wants nothing to do with them. She makes them eat Chinese takeout dinners, forbids them to enter her kitchen, and never explains the strange visitors with Afros and black berets who knock on her door. Rather than spend time with them, Cecile sends Delphine, Vonetta, and Fern to a summer camp sponsored by a revolutionary group, the Black Panthers, where the girls get a radical new education.

Set during one of the most tumultuous years in recent American history, one crazy summer is the heartbreaking, funny tale of three girls in search of the mother who abandoned them—an unforgettable story told by a distinguished author of books for children and teens, Rita Williams-Garcia.

Rita Williams-Garcia's Newbery Honor-winning novel, One Crazy Summer, was a winner of the Coretta Scott King Award, a National Book Award finalist, the recipient of the Scott O'Dell Award for Historical Fiction, and a New York Times bestseller. The sequel, P.S. Be Eleven, was also a Coretta Scott King Award winner and an ALA Notable Children's Book for Middle Readers. She is also the author of six distinguished novels for young adults: Jumped, a National Book Award finalist; No Laughter Here, Every Time a Rainbow Dies (a Publishers Weekly Best Children's Book), and Fast Talk on a Slow Track (all ALA Best Books for Young Adults); Blue Tights; and Like Sisters on the Homefront, a Coretta Scott King Honor Book. Rita Williams-Garcia lives in Jamaica, New York, is on the faculty at the Vermont College of Fine Arts in the Writing for Children & Young Adults Program, and has two adult daughters, Stephanie and Michelle, and a son-in-law, Adam.