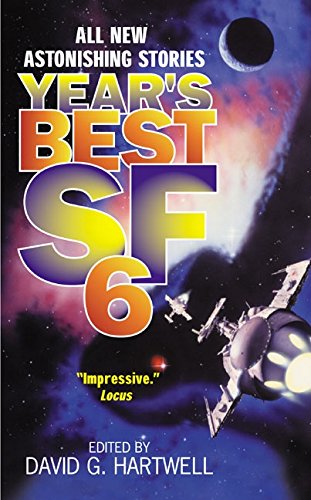 Get Ready To Expand Your Mind...

Acclaimed editor and anthologist David G. Hartwell is back with the sixth annual collection of the year's most impressive, thought-provoking, and just plain great science fiction.

Year's Best SF 6 includes contributions from the greatest stars of the field as well as remarkable newcomers -- galaxies and into unexplored territory deep within your own soul.

Here are stories from:

David Hartwell's guiding principle for his annual science fiction anthologies is that the stories be clearly science fiction--not fantasy, horror, or postmodern. As always, for the 2001 edition he has chosen stories representing the best of the SF field, along with several short pieces published in Nature magazine as part of a millennium celebration.

David G. Hartwell is a senior editor of Tor/Forge Books. His doctorate is in Comparative Medieval Literature. He is the proprietor of Dragon Press, publisher and bookseller, which publishes The New York Review of Science Fiction, and the president of David G. Hartwell, Inc. He is the author of Age of Wonders and the editor of many anthologies, including The Dark Descent, The World Treasury of Science Fiction, The Hard SF Renaissance, The Space Opera Renaissance, and a number of Christmas anthologies, among others. Recently he co-edited his fifteenth annual paperback volume of Year's Best SF, and co-edited the ninth Year's Best Fantasy. John Updike, reviewing The World Treasury of Science Fiction in The New Yorker, characterized him as a "loving expert." He is on the board of the IAFA, is co-chairman of the board of the World Fantasy Convention, and an administrator of the Philip K. Dick Award. He has won the Eaton Award, the World Fantasy Award, and has been nominated for the Hugo Award forty times to date, winning as Best Editor in 2006, 2008, and 2009.