Items related to You Look Different in Real Life

You Look Different in Real Life 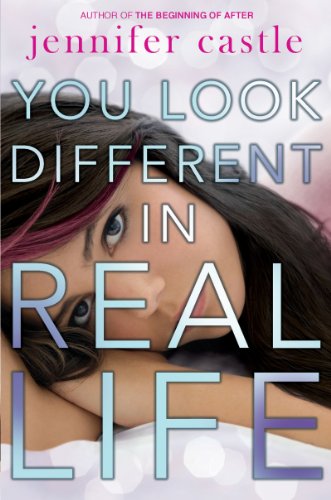 Readers of John Green, Sarah Dessen, and Laurie Halse Anderson will be touched by the emotional depth and realistic characters of Jennifer Castle's teen novel You Look Different in Real Life.

Justine charmed the nation in a documentary film featuring five kindergartners. Five years later, her edgy sense of humor made her the star of a second movie that caught up with the lives of the same five kids. Now Justine is sixteen, and another sequel is in the works. Justine isn't ready to have viewers examining her life again. She feels like a disappointment, not at all like the girl everyone fell in love with in the first two movies. But, ready or not, she and the other four teens will soon be in front of the cameras again.

Smart, fresh, and funny, You Look Different in Real Life is an affecting novel about life in an age where the lines between what's personal and what's public aren't always clear.

Where did you get the idea to write a book about teens who are documentary film subjects?
I've always wondered what happens to reality TV and documentary film subjects after the cameras go away. Do they live their lives differently, like someone's always watching? Does the way they're portrayed on screen change the way they see themselves in real life? The possibilities of character and story seemed so juicy, I couldn't resist. Then I started thinking about how the rise of blogging and social media has allowed pretty much everyone to make themselves the "stars" of their own documentary. Every time we post a status, a photo, check in at a location...we're building a narrative of our own lives. I think it's scary-easy to share so much of ourselves, to think so obsessively about what we're putting out there for the world to see, that we lose track of who we really are.
I'm also a huge fan of documentary films, perhaps for the same reason why I love writing contemporary YA fiction: sometimes there's nothing more fascinating than real life. One of my favorite documentaries is the "Up" series of films by director Michael Apted. He started by interviewing a group of 7-year-olds in England in 1964, and has checked in on their lives every 7 years, with the most recent being "56 Up." This seemed like a great premise for a novel, and I couldn't resist.

Did you have a writing playlist for You Look Different in Real Life?
Big time. Here's what inspired the voices, moods, and emotions of this book's characters:

At this point you could ask: Well, Jen, which is it? Are we heroes, or are we made of stars? We are both, and everything in between.

Why do you write Young Adult (YA) novels?

The simplest answer is, that's where my storytelling heart lives. It's where my writing voice feels the most organic and authentic. But I've considered this question a lot, and I've realized that young adulthood is where the overarching issues of life--love, friendship, family, identity, generally finding one's place in the world--explode gloriously. There's an urgency that's so compelling to me: all literature asks the "big questions," but YA lit REALLY REALLY REALLY wants to know the answers.

What are you working on now?
With both The Beginning of After and You Look Different in Real Life, I loved writing the romantic storylines. So my current project is a summer romance, pure and simple (even though romances are never pure and simple, are they?). It's about what happens when a killer crush actually leads to something, and you have to navigate that intersection of fantasy and reality. It's about figuring out what love actually is, when you don't have any good examples in your life to base it on. And it's got a cute guy who is amazing but not flawless, craveable but problematically complex, because "perfect" boys in YA lit really bug me. Look for it circa Summer 2016. From the Back Cover:

For the rest of the world, the movies are entertainment. For Justine, they're real life.

Now sixteen, Justine doesn't feel like a star anymore. In fact, when she hears the crew has gotten the green light to film Five at Sixteen, all she feels is dread. The kids who shared the same table in kindergarten have become teenagers who hardly know one another. And Justine, who was so funny and edgy in the first two movies,feels like a disappointment.

But these teens have a bond that goes deeper than what's on film. They've all shared the painful details of their lives with countless viewers. They all know how it feels to have fans as well as friends. So when this latest movie gives them the chance to reunite, Justine and her costars are going to take it. Because sometimes, the only way to see yourself is through someone else's eyes.

Smart, fresh, and frequently funny, You Look Different in Real Life is a piercing novel about life in an age where the lines between what's personal and what's public aren't always clear.

1. You Look Different in Real Life

2. You Look Different in Real Life

3. You Look Different in Real Life

4. You Look Different in Real Life