Items related to Living in a Nutshell: Posh and Portable Decorating...

Living in a Nutshell: Posh and Portable Decorating Ideas for Small Spaces 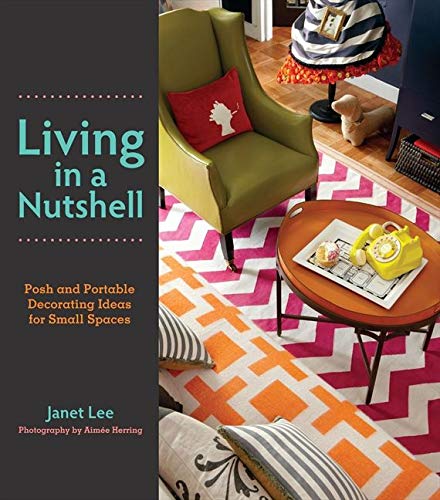 A fireplace on wheels? A chandelier lit by Xerox? A shrink-wrapped designer closet? These are just a few of the more than 100 stylish and innovative projects in Janet Lee’s Living in a Nutshell: a one-of-a-kind DIY decorating guide with fresh ideas to fool the eye into seeing—and believing—that even the most cramped little lair can hold more space and glamor than just the sum its of four walls.

The design maven behind livinginanutshell.com and Oprah Winfrey’s interior style producer for a decade, Janet Lee has personally handpicked a battery of clever projects for enhancing every area of a tiny living space—all are simple to do, require no craft skills, are emphatically affordable, readily portable, and big on style, so you can make these design dreams become your reality.

A fireplace on wheels?
A chandelier light by Xerox?
A shrink-wrapped designer closet?

These are just a few of the more than one hundred innovative projects in Living in a Nutshell, a DIY guide of decorating ideas that fool the eye into seeing and believing a little lair is larger and more glamorous than its four walls. Here are fresh ideas for enhancing every living area of a tiny space. All are simple, affordable, portable, and big on style. An illustrated survival tool kit as well as extensive listings of untapped, off-the-beaten-track design resources and a select buying guide round out this invaluable book.

Janet Lee is an Emmy Award-winning television show producer, styling and producing for leading home decorators, entrepreneurs, and designers such as Martha Stewart, B. Smith, and Thom Filicia. During her ten years as a senior producer for The Oprah Show, she worked closely with such style greats as Nate Berkus. She has also been a home décor producer for Lifetime Television's Our Home and was featured on camera as the show's weekend decorator, demonstrating chic, easy DIY projects. She has also appeared on CBS's The Early Show, where she demonstrated her high-end-for-less décor ideas. Now a freelance producer, she lives in New York City.

1. Living in a Nutshell: Posh and Portable Decorating Ideas for Small Spaces

2. Living in a Nutshell

3. Living in a Nutshell: Posh and Portable Decorating Ideas for Small Spaces

4. Living in a Nutshell: Posh and Portable Decorating Ideas for Small Spaces