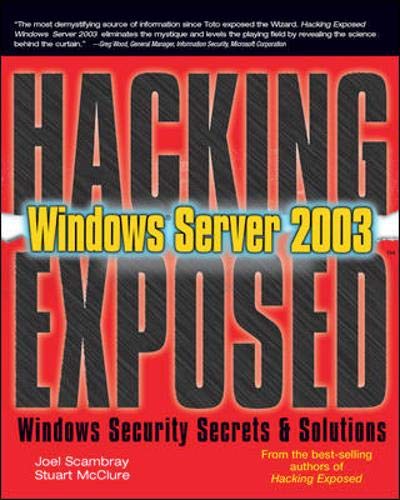 "The most demystifying source of information since Toto exposed the Wizard. Hacking Exposed Windows Server 2003 eliminates the mystique and levels the playing field by revealing the science behind the curtain." --Greg Wood, General Manager, Information Security, Microsoft Corporation

"The end-all of hacking.... A must-read if you want to secure your networks." --W2Knews

Joel Scambray is Senior Director of Security for Microsoft's MSN and Stuart McClure is President/CTO of Foundstone, Inc., an enterprise security products company. They are co-authors of four editions of Hacking Exposed as well as Hacking Exposed Windows 2000.

Joel Scambray is Chief Strategy Officer for Leviathan Security Group, an information security consultancy located in Seattle and Denver. As a member of Leviathan’s board and executive management team, Joel guides the evolution and execution of Leviathan’s business and technical strategy. Prior to Leviathan, Joel was a Senior Director at Microsoft Corporation, where he led Microsoft's online services security efforts for three years before joining the Windows platform and services division to focus on security technology architecture. Before joining Microsoft, Joel co-founded security software and services startup Foundstone Inc. and helped lead it to acquisition by McAfee for $86M. He previously held positions as a Manager for Ernst & Young, security columnist for Microsoft TechNet, Editor at Large for InfoWorld Magazine, and Director of IT for a major commercial real estate firm. Joel is widely recognized as co-author of the original Hacking Exposed: Network Security Secrets & Solutions, the international best-selling computer security book that reached its Fifth Edition in April 2005. He is also lead author of the Hacking Exposed: Windows and Hacking Exposed: Web Applications series. Joel's writing draws primarily on his experiences in security technology development, IT operations security, and consulting. He has worked with organizations ranging in size from world’s largest enterprises to small startups. He has spoken widely on information security at forums including Black Hat, I-4, and The Asia Europe Meeting (ASEM), as well as organizations including CERT, The Computer Security Institute (CSI), ISSA, ISACA, SANS, private corporations, and government agencies such as the Korean Information Security Agency (KISA), FBI, and the RCMP. Joel holds a BS from the University of California at Davis, a MA from UCLA, and he is a Certified Information Systems Security Professional (CISSP).